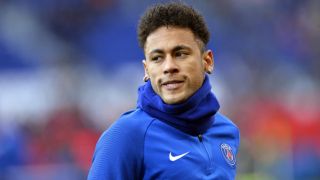 Real Madrid boss Zinedine Zidane says he will gladly discuss rumours of a transfer bid for Neymar – but only after the Champions League final.

The latest rumours in Spain this week have suggested the Brazil star has agreed personal terms with Madrid, who must now negotiate with Paris Saint-Germain.

It is claimed Madrid president Florentino Perez is willing to pay any price for Neymar, who only left Barcelona to join PSG last August in a world-record €222million deal.

With the speculation refusing to die down, Zidane wants to put all his focus on Madrid's last LaLiga game against Villarreal and their European date with Liverpool before talking about transfers.

"I'm not going to talk more about a player who isn't one of mine," he told a news conference on Friday. "There are 10 days and two games left. After that, we'll talk about what you want."

Zidane was also asked about the future of Antoine Griezmann, who has been tipped to join Barca from Atletico Madrid in a €100m deal.

However, the 45-year-old insists the plans of his compatriot are not his business.

"I don't have any information," he replied when asked about Griezmann. "We'll see. I don't think it's either good or bad [for him to leave]. It's not my problem."

With the meeting with Liverpool in Kiev just eight days away, there are suggestions Zidane will look to rest some of his key players for the trip to Villarreal, although he has already confirmed Cristiano Ronaldo will return from injury at Estadio de la Ceramica.

It could mean Borja Mayoral, Dani Ceballos and Marcos Llorente get the chance to impress, having only made 12 LaLiga starts between them this season.

Zidane, though, believes each player has had a positive year at the club despite their lack of playing time, and he expects all to be more involved in 2018-19.

"One year here is like 10 elsewhere," he added. "It's not a lost year; quite the opposite. They've improved so much. They all hope to play more but it's a very positive year. Next year, they have to play more."