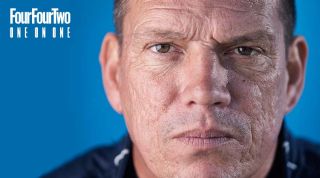 The German wing-back had made more than 200 appearances for Bayern Munich – winning two Bundesliga titles and the UEFA Cup – when the time came for him to leave, with Arsenal, Newcastle United and Barcelona among his possible suitors.

However, the Euro 96 winner chose Milan instead, lifting a Scudetto in the second of his two seasons at the San Siro before finally moving to England with Middlesbrough.

Spells at Liverpool and Tottenham stretched Ziege’s Premier League career to five years, and he reveals it could have been more if he’d ended up joining the Red Devils first.

Speaking exclusively in the June 2017 issue of FourFourTwo magazine, he says: “I was linked with quite a lot of teams [in 1997], but I wanted to go to Italy.

“Almost all of the best footballers were out there, because England had the problem with not playing in Europe for five seasons [after the Heysel disaster].

“I had offers from Barcelona, Juventus, Milan, Atletico Madrid and Newcastle – and I was talking to Alex Ferguson at Manchester United at one stage, but my decision was made. I told him it would have been better if he had called me up earlier, as Manchester United were massive at the time, but I was happy to join Milan.”

Despite adding a Serie A title to his honours list, Ziege only made 17 league outings in his second campaign, and he admits he struggled to adapt to life in a new country and cope with the pressure of playing in Paolo Maldini’s left-back berth.

“It’s always very difficult to go abroad as you have to adapt, and at the start you don’t speak the language,” he says. “We had problems in my first year: the coach was telling Maldini, who’d played left-back there for 10 years, that he had to switch to the right.

“Paolo never said anything to me and he wasn’t angry – he was the best professional I ever met – but you could feel the pressure. But in the second season a lot changed and we won the league title. To go over to Serie A as a foreign player and lift the trophy was special.”

Read the full interview with Christian Ziege in the June 2017 issue of FourFourTwo magazine, in which we profile Barcelona and Brazil superstar Neymar and his quest to take on Lionel Messi’s mantle as the best player on the planet. Also this month, we slip on a neon jacket and become a steward for a day at The Hawthorns, speak to Chelsea defender David Luiz about his successful return to Stamford Bridge, review 23 of the game’s maddest owners, hear from Manolo Gabbiadini on his sensational start to life at Southampton and remember when Man United stopped Liverpool from completing the Treble in the 1977 FA Cup Final. Order it now, and then subscribe!