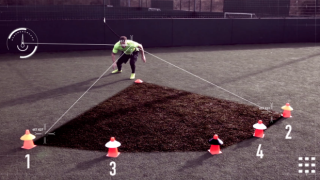 Having the ability to drive forwards from a standing start and backpedal with equal efficiency can be the difference between winning and losing.

Imagine this scenario: A loose ball falls in the box. If you’re quicker than your opponent, you’ll beat them to it – either earning yourself a shot on goal or bringing a foul from their lunging challenge. If you can’t get out of the blocks the defender will beat you to the ball and clear their lines. Chance gone.

Here’s another scenario for you. Your opponents have a corner – it gets cleared to the edge of the box, dropping right at the feet of their long-range shooting specialist. If you’re quick off the mark you’ll get out to him and block the shot. But, if you’re slow he’ll lash the ball into the back of the net.

Do you want to be the player that’s first to the ball or the one who always arrives that second too late?

If you want to be your team’s star man, watch this training drill from Premier League conditioning coach, Jamie Reynolds and optimize your performance.

If you’re happy finishing second, you’re in the wrong place.

Reynolds is the founder of Velocity Training Club. For more information visit velocitytrainingclub.co.uk and follow@jamie_velocity

For more football tips see:
Beat your man to the ball
Soup up your sprint speed
Get rapid-fire footwork
Change direction in a flash
Be first to the through ball
Supercharge your engine