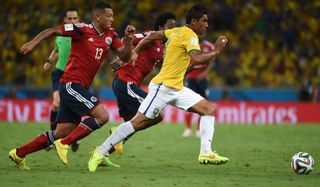 “To develop your own game you have to build a good rapport with your team-mates – that’s what happened to me at Corinthians and with the Brazilian national team. I was playing with Luiz Gustavo for the Selecao and we didn’t have long to work on our partnership, but we talked a lot to compensate. Every day after training we would chat and after a match we discussed our understanding and link-up play. It wasn’t perfect – we have made mistakes – but doing that helped.”

“Many players only have eyes for marking the opposition’s offensive midfielders, but it’s essential to know how you can cause damage in the final third. The key to this is positioning and movement – you need to know where to position yourself in and out of possession. Pay attention to the movement of your team-mates – the runs they make will open space for you to get in behind the defence. Then it’s up to you to know the right moment to gamble.”

“Passing is all about training. When you’re a professional you learn a lot, but it was during my time playing futsal as a kid that I built a solid foundation for my passing skills. I’ve always liked to practise ball possession on a smaller pitch. You need to be really focused, because on a smaller pitch you have to think very fast and pass accurately. When you’re working in a tight space you can only take two or three touches. I think I’ve evolved a lot by training like this.”

“You can learn so much by watching great players. I liked to watch Vampeta for Corinthians in the late ’90s. He was brilliant and someone I observed a lot as a kid. But I also liked to watch Zinedine Zidane play. He’s my idol. I learned a lot from all the coaches I have worked with, too. They taught me how to take advantage of the space in midfield. Now I realise that when my team-mates are marked there’s a corridor for me to run into, so I can get beyond the strikers.”

Stay a step ahead

Get on the shooting range

“There’s a lot of pressure when you’re bearing down on goal in a game so you have to try to create match-like conditions in training. This will help you replicate the situations you will face in game, but during a real match it’s up to you to read the situation and, most importantly, improvise. I always practise finishing after training so when I’m presented with a chance in a game I can think clearly and place the ball where I want it.”

For more football tips see:
Andres Iniesta: How to boss the midfield
Michael Ballack: How to be the complete midfielder
Mikel Arteta: Pass your opponents off the park
Yaya Toure: Dominate the middle of the park
Jack Wilshere: How to keep possession