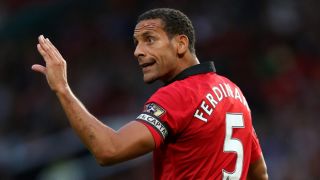 “You can’t use the old tactic of ‘letting the striker know you’re there’ early on. You have to be careful in the modern game as it’s almost non-contact.

I like to watch intelligent defenders – guys who can play a bit of football and play themselves out of trouble. It’s mainly instinct and experience.

Some players just seem to have this knack of where to position themselves and the ball seems to be drawn to them like a magnet.

In some ways you can learn about positioning, but a lot of it comes down to instinct and your reading of the game. And that’s something that comes with experience.

I love it when the ball gets played into a striker’s feet – hard and low across the box – and a defender has anticipated that pass and positioned himself in the right place to step out, nick it from the forward and then launch an attack for his own team.”

For more football tips see:
Rio Ferdinand's Ultimate Defender
Sylvain Distin: Dominate your opponent
Franco Baresi: How to defend like a master
Chris Smalling: How to be the complete defender
Nemanja Vidic: Tackle any threat
Rio: The thinking man's guide to defending
Ashley Cole: How to handle every opponent