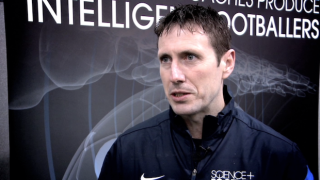 Ever wondered how Manchester United's players always seem to find an extra gear in the dying moments of a game?

Their ability to dig deep when their opponents tire has often been the difference between securing all three points and settling for one or none. United keep going from the first minute to the last.

To find out what gives them the edge, FFT caught up with club's head of fitness and conditioning, Tony Strudwick.

"A typical working week at Manchester United? We rarely get the opportunity to go from Saturday to Saturday.

But on Monday it'll be consolidating where the team are at. We will probably have an aerobic-type drill with bigger areas and larger numbers. So we might start with an injury-preventative warm-up to get them through the week.

Then we'll go into some drills where we do 8 v 8 and 9 v 9, again keeping the work to under eight or nine minutes per set. Typically we'll work for around 30 minutes and then we'll send the players in.

The players will then go in and do their own individual gym work. The recovery and ancillary components come with that.

When there's emphasis on speed the numbers will come down a bit but again you're working in tight areas with emphasis on the football - quick movements.

Wednesday, following a stretch and a warm-up in a gymnasium environment, we'll probably work at small-sided games with an element of putting the players under pressure.

Some kind of repeated sprint maybe, or games where we are putting them under quite intense pressure.

Thursday will be a recovery-based day. That's not to say all the players will stay in but they will just have a reduced load. We will micro-manage some of the players we feel need it - it's an individual day.

Friday will be a reactive session with a fitness coach - again, functional sprints, relay reactive-type work. Saturday is the game, Sunday recover and you go again."