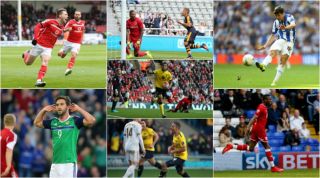 It seems unnecessary now to rake through the ashes of Villa’s miserable 2015/16 – which saw the club relegated for the first time in 29 years – but the collective goal tally of their three leading scorers remains pertinent. Gestede, Jordan Ayew and Gabby Agbonlahor spun off in celebration a meagre 14 times last term, a sorry statistic that has seen new boss Roberto Di Matteo prioritise his team's lack of goal threat ahead of a defining year.

On the face of it, Ross McCormack's arrival from Fulham would seem to suggest that Gestede's starting position is under threat, with recent reports linking him with a move to Hull City. The burly frontman's 32 goals in all competitions for Blackburn in 2014/15 is proof of his effectiveness in the Championship, though, and he and Ayew have the makings of a potentially clinical big-man-little-man pairing.

Before gazumping Norwich for McCormack’s services, Villa were reportedly weighing up a move for Kodjia, who struck 19 league goals for Bristol City last season. The Ivorian represented a gamble when City paid over £2 million to French side Angers for his services last summer, but the 6ft 2in centre-forward's eye for goal has made him worth every penny.

The international recognition and widespread plaudits Kodjia gained last term has seen him push for a transfer up the food chain, with manager Lee Johnson admitting his star striker has become unsettled by the constant speculation. With club and player harbouring serious Premier League aspirations, more goals from Kodjia could help realise the ambitions of both parties – or at least the player's.

The latter half of Gayle’s three-year stint at Crystal Palace consisted of limited game time and a constant need to prove himself over managerial favourites, a situation that must have irritated the most gifted finisher on the club’s books. Championship defenders could bear the brunt of Gayle's frustration in the months to come, then, with Newcastle's £10 million addition ready to shine in the second tier.

Rafael Benitez has experience of building his teams around a deadly forward, with Fernando Torres and Gonzalo Higuain just two players who benefited from working under the Spaniard. Gayle – along with Aleksandar Mitrovic and Ayoze Perez – could run riot against inferior opponents this season.

Despite their play-off disappointment in May, Wednesday have every reason to believe their immediate future is bright, particularly as they'll be able to call upon Forestieri's firepower again this season.

The Argentine’s return of 15 goals last term doesn't tell the whole story of his infectious enthusiasm in the final third, with Forestieri rousing passion and commitment from his team-mates and the Hillsborough faithful alike. After several seasons in the backwaters of Serie A and a mixed spell with Watford, the 26-year-old appears to have finally found his home.

An impressive tally of 26 goals and 11 assists saw the Oxford forward scoop the League Two Player of the Year award in 2015/16, with Leeds moving quickly to bring the striker to Elland Road. His lightning turn of pace and eye for the spectacular should see him become a real fans' favourite at Leeds, who are crying out for a 20-goal-a-season striker.

A formidable partnership with fellow new boy Pablo Hernandez beckons, and while it’s perhaps too much to expect a further avalanche of goals in Roofe's first season at this level, it’s not inconceivable that struggling Premier League sides could cast their eyes in his direction in the January window.

Several Championship clubs battled it out for the prolific Walsall striker’s signature this summer, with Barnsley winning the race and rubbing salt in the wounds of the Saddlers after also depriving them of a place in the League One play-off final in May.

The 23-year-old may be unproven at this level but he certainly knows where the goal is: Bradshaw found the back of the net 40 times in his two years at the Bescot Stadium. The penalty-box poacher also won his first Wales cap in March and was a strong contender to make Chris Coleman's squad for the Euros before injury inconveniently intervened.

7 Ligue 1 prospects worth getting excited about

8 celebrities you had no idea were good at football

To include Grigg here and not mention that song would be like interviewing Neil Armstrong and failing to bring up that Moon landing thing.

But while the ditty helped to light up a somewhat mediocre Euros this summer, Grigg probably wouldn't mind it being quietly snuffed out before it completely overshadows the clinical finisher's actions on the pitch.