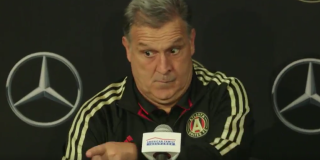 There are many reasons why Atlanta United couldn’t overcome Orlando City in last Saturday’s thrilling 3-3 draw in MLS – but fans are pointing the finger at AJC journalist Doug Roberson, who sat in the wrong spot during Tata Martino’s pre-match press conference.

Martino's kooky superstitions involve keeping things the same from previous wins – including reporters sitting in the same spots as before, and ensuring that his translator stays on his left side at weekly press conferences.

Despite an impressive Josef Martinez hat-trick, the home side were unable to push on and find a late winner in front of the 70,000 crowd – an MLS record.

While Atlanta are enjoying a fine debut season in MLS and look well poised to make the play-offs, fans will be left wondering if they'd be two points better off had Roberson sat in the spot intended for him from the start.

The Five Stripes are currently fifth in the Eastern Conference, seven points and a game in hand better off than seventh-placed Montreal.