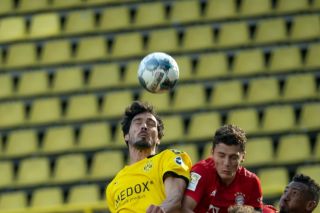 Whatever happened to the opening paragraphs? Where have those gone?

The time was, particularly with German football, that a few hundred words could be spent just by describing the thermals and the taste of the pre-match atmosphere. The smell of cordite would hang in the air, the noise would pound against the pressbox and everything would just take care of itself.

Well, not at the moment and it’s for occasions like Borussia Dortmund against Bayern Munich that that’s especially jarring. That kind of game belongs under dark, frothing skies and with storms in the stands. When it isn’t, it can be hard to grasp the magnitude.

This was a warm-up, surely, a youth team game? When are the real players coming on?

Point taken, but it ultimately proved a reminder that football can be fine enough to draw its pulse from within. From the first minute, Dortmund and Munich went at each other with rhythmic intent. When the sport is played to the highest excellence – and this was definitely that – matches hum with energy. Between the metronomic tap-tap-tap of the passing, and the whistle of the moving ball, it becomes a spectacle regardless of where it’s being played or, thankfully, irrespective of how many are watching.

There’s also more to notice. The Bundesliga’s resumption has birthed a few tenuous theories. One is that without the crowds, without the support and denied all those other intangibles that infuse and obfuscate performance, it’s easier to spot the difference between the good teams and the bad.

Without the throng of noise, it’s clearer – for instance – which sides have the better method to their football and which of them rely more on hustle and bustle. Perhaps it’s something to do with there being fewer distractions on the periphery? Whatever the case, the stillness that surrounds these games sharpens the eyes.

It doesn’t make football better – definitely not, let’s be clear about that – but it makes it easier to read its fineprint.

On Tuesday night, that spoke to just how hard it must be to score goals against Bayern Munich. Dortmund played some beautiful football, especially in the first half, but no matter how they twisted and contorted their opposition, the visitors invariably just snapped back into shape – if they were ever made to feel uncomfortable in the first place.

Maybe that was the takeaway detail: in games between high class opponent, constructing moves is full of peril. In Dortmund’s case that’s a risk they choose to dance with; Lucien Favre’s football is intricate by design. Even so, unbalancing a team of Bayern’s resources involves all sorts of threaded needles.

GUIDE Bundesliga live stream: How to watch Borussia Dortmund vs Bayern Munich and every German game this week

Passes into midfield have to be disguised. Then, when the ball does get there, it has to continue to move quickly, precisely, and with original enough angles and enough urgency to remain out of reach. Remember that video of the lizard running through the valley of snakes? That, essentially.

It’s counter-intuitive, because the training ground aesthetic of these games should make them seem more sterile and benign. And yet the danger is actually a little more obvious. Make a mistake in that narrow corridor and, inevitably, there’s Coman or Davies or Muller or Lewandowski ready to roar into space and do all sorts of damage. In an empty stadium, they seem particularly lethal.

To their credit, Dortmund did make some incisions. Particularly down the right side, where Hakimi had some joy, finding a couple of good positions and a few useful crossing angles. Alas, the final pass was always under or over-hit. When it wasn’t, Bayern’s defensive pieces were in place to force a check-back or a hesitation. In fact, the closer Dortmund got to goal at the Westfalenstadion, the less they looked like scoring.

At least one of those situations should have led to a goal. What their failure invariably suggested, though, was that an awful lot has to go right in order to score against that kind of team. Even when they’re not at their best, which Bayern clearly weren’t.

Even then, decisions have to be made precisely at right time. Passes have to be timed and weighted correctly. Most importantly, everything has to be done at reflex-like speed, because a group of defenders with such a breadth of attributes – positioning, pace, skill, intelligence, experience ego – only remains vulnerable for a few seconds. In other words, while they may occasionally leave their doors ajar, it’s never long enough for anyone to pause and reflect.

Maybe there’s something in that. Perhaps that’s why when Dortmund do score goals in this fixture, they often look similar. Not identical, but with a vague familiarity. They’re lightning quick and intricate, full of perfect touches and passes which defenders can’t quite reach. Alcacer’s in the Supercup, then Sancho’s sealer late on; they were like that. And they had to be. It was brilliant football, for sure, but that’s the standard required – it’s what the best defences demand of those who face them.

So, what do these games make us appreciate – what is their virtue? Probably that elite football, the kind contested in rare, top of the table air, is incredibly difficult and that any authoring of decisive moments depends on an almost ludicrous precision.

It was our lesson from Tuesday. Borussia Dortmund’s too.