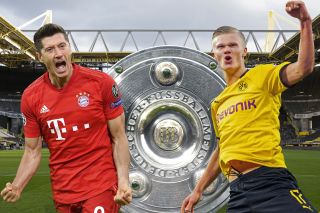 German football’s two most successful clubs face one another on Tuesday evening and, typically, there is a lot at stake. But why is Bayern Munich vs Borussia Dortmund such a huge game and where did the rivalry begin?

Here, we explain the biggest game in German football.

Enemies from a distance

GUIDE Bundesliga live stream: How to watch Borussia Dortmund vs Bayern Munich and every German game this week

The rivalry between Bayern Munich and Borussia Dortmund isn’t based on proximity. Unlike the classic German football derbies – such as Dortmund-Schalke or Hamburg-St. Pauli – there’s no local pride at stake.

Indeed, Bayern and Dortmund are separated by more than 300 miles of efficiently built German motorway.

Instead, the rivalry is based on purely sporting terms – which generally speaking, means a bit less tribalism, hatred and occasional violence.

But what the game lacks in passion compared to other clashes, it makes up for in technical quality. These are, historically speaking, the best two teams in German football, meaning better players, more esteemed coaches and, more often than not, more on the line than those aforementioned scraps.

Official figures state that 22% of the German population are Bayern Munich fans, with 21% supporting Borussia Dortmund. So, despite the lack of local beef, the sides are well supported across Germany.

The first meeting between the two clubs came in 1965, two years after the formation of Germany’s top flight. Dortmund won that clash in Munich 2-0.

Both clubs won the European Cup Winners’ Cup in the mid-sixties, an early indication of their joint status as the best teams in German football, before Bayern hammered Dortmund 11-1 in the Bundesliga in 1971.

In truth, however, it wasn’t until the 1990s the feud really took off, with Bayern dominating German football throughout the '70s and '80s.

A pretty poor '80s saw Dortmund narrowly avoid relegation on two occasions, with the club in serious financial trouble for most of the decade. Victory in the 1989 German Cup was a sign the tide was turning, however, and the Black and Yellows were Bundesliga champions for the very first time in the 94-95 campaign.

By that stage, Bayern had already won 12 titles and three European Cups but, as anyone who regularly watches German football will tell you, the Bavarian outfit don’t take kindly to having their dominance questioned.

Dortmund’s success continued, as they added a second consecutive title in 95-96, before a Champions League victory in 1997. Earlier that season, one of the most infamous scenes ever in Der Klassiker took place, with Lothar Matthäus accusing Dortmund’s Andreas Möller – scorer of the winning penalty against England in the semi-final shootout at Euro 96 – of play-acting by pretending to cry like a baby. Möller responded by slapping the Bayern skipper. The bad blood was building.

Bayern fared the better of the two clubs at the turn of the millennium, winning three titles on the bounce between 1999 and 2001, as well as the 2001 Champions League, before Dortmund briefly wrestled back domestic dominance in 2002.

Financial mismanagement saw Dortmund plunged into financial ruin shortly after that victory, and just a few years after the club became the first from Germany to go public on the stock exchange. Dortmund were forced to sell land around their stadium, the Westfalenstadion, while failure to qualify for the 2003-04 Champions League pushed them to the brink of financial ruin.

What happened next is often forgotten by younger generations. Bayern Munich handed their rivals a two million euro interest-free loan, so that player wages could continue to be paid on time. The cash injection was a major reason Borussia Dortmund avoided bankruptcy.

The team from North-Rhein Westphalia kept their heads above water and, while no longer a force on the football side of things, could count themselves lucky to even be playing Bundesliga football.

Klopp, Pep and the present day

Some signings are so inspired they single handedly drag a football club back to the big time. While it could be argued Borussia Dortmund’s 2004 appointment of CEO Hans-Joachim Watzke was just as inspired as any coach, few could deny Juergen Klopp’s impact.

The now-Liverpool boss revitalised a Borussia Dortmund on its knees and, with a number of shrewd signings and academy graduates – including Robert Lewandowski, Matts Hummels, Mario Götze and Ilkay Gundogan – won back-to-back Bundesliga titles in 2011 and 2012, as well as a cup double in the latter campaign.

Bayern are never better than when dealing with an in-form Dortmund and responded by winning a treble in 2013, including a tightly-contested all-German Champions League final against their rivals. The 2-1 win at Wembley was possibly German football’s greatest hour - European football’s two finest teams contesting the biggest prize of all.

The arrival of Pep Guardiola elevated Bayern to new levels in 2014, with Dortmund struggling to find a long-term replacement for Klopp after his departure in 2015.

A number of key players had left the Black and Yellows for the Bavarians over previous seasons – including Lewandowski, Hummels and Götze - as Bayern embarked on a winning-run of seven straight Bundesliga titles which remains unbroken today.

Under new management – Dortmund with Lucien Favre and Bayern with the now-departed Nikom Kovac – the title went down to the final day of the 2018/19 season, with Bayern emerging victorious.

In 125 competitive meetings between Bayern Munich and Borussia Dortmund, the Bavarians have the upper hand: winning 59, drawing 33 times and losing 33.

Bayern have the upper-hand in terms of silverware too. The Bavarians have claimed 28 league titles, 19 German Cups and five European Cups. Dortmund have won just five Bundesliga titles, four German Cups and one Champions League.

But remember, it’s the next game that counts...