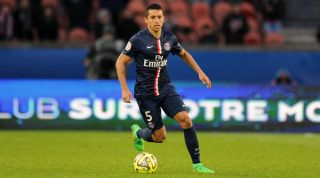 He's one of the most promising defenders in Europe. He turned down Manchester United to join the PSG project. He's Brazilian but he might have played for Portugal if they'd asked. And now he stands in the way of Chelsea's progress in the Champions League....

He’s the best coach a young defender could have. He had such a great career. Maybe one day he can tell me how France stopped Brazil in 1998! Just kidding – it’s better not to remember that...

In July 2011 PSG were bought by Qatar Sports Investments (QSI). How much do you see of the chairman, Nasser Al-Khelaifi?

He’s always with us. He’s very close to the team. No one can say we have a lack of support [from the owners]. As for QSI, there are no limits for them. If they woke up one day and decided they wanted to buy Neymar, I’m sure they would get him. I wouldn’t complain – it would mean another Brazilian for our group and another star for Paris Saint-Germain. Our owners dream about winning titles and are always searching for new names who can bring us closer to that goal. Neymar has been at Barcelona for only two years so it wouldn’t be easy for us to take him from them, but anything is possible.

With players from so many different backgrounds, what’s the vibe like in the dressing room?

There’s a little bit of competition between us. The dressing room is like our second home, and at a club such as PSG we share it with footballers from different cultures: [Ezequiel] Lavezzi is usually our DJ and puts on some reggaeton and electronic music, and Ibra usually goes with the same – but if Lucas Moura, Maxwell and me arrive first then we bring some samba and country music. We often listen to French songs, too. Whoever gets there first owns the music [laughs].

At 6ft, you’re not particularly tall for a central defender. How do you compensate for that lack of height?
Well, you can never say I don’t work hard in training – I really do! I compensate in other areas. I focus on strength exercises in the gym and on the timing of tackles so I can become a more complete centre-back. [Former PSG assistant manager Claude] Makelele was very important. He never said no when I asked him for help.

You began your career with Corinthians in your native Brazil, but struggled to hold down a regular place in the side before moving to Roma in July 2012. Why do you think that was?
That’s a sensitive situation to evaluate. I have no idea why I didn’t have more chances. There were more experienced players in my position and it was a tough fight. I didn’t want to move to Roma at the time, but then they talked to me and convinced me that the youngsters would be at the centre of their project.

It was marvellous. Rome reminds me a lot of Sao Paulo, Rio de Janeiro – Brazil. Paris is more like Buenos Aires, Argentina. Warm and cold. Brazil and Argentina. We always end up on this! [laughs]

You made your senior Brazil debut in October 2013, and you’re also part of the under-23 side aiming to win the 2016 Olympics in Rio. Has it been hard to switch between the two levels?
If the under-15s coach wants to call me up, I’m available! I’ll always be ready to represent Brazil – it doesn’t matter which team. We’ve got the Olympic project, but then Dunga decided to bring me into the main side when I was on my way to Dubai for a youth tournament.

Were you disappointed to miss out on last year’s World Cup on home soil? Or did the competition just come too early in your career?
Well, I believed I could have been in the World Cup squad. As we say in Brazil: while there’s life, there’s hope. I waited for [the call-up] until the last minute, I’m sure I did good work and I put in some great performances during the season. But what can I say? It ended up not happening. I respect the choices made by the coach.

I was even younger then and I was aware that it would be very difficult for me, but I would have given everything to be there with them, even after the 7-1 defeat to Germany. I wanted to be there, to have that experience of playing in the World Cup at home.

You have dual citizenship: Brazilian and Portuguese. Would you have considered representing Portugal at international level?

The idea did cross my mind. I thought about it for some time. If an invitation had come along, why not? But that’s not under discussion anymore. I’m sure I made the best decision.

When you swapped Rome for Paris in 2013 you were also strongly linked with a move to Manchester United. Does playing in the Premier League at some stage in your career hold any interest for you?

The Premier League is watched around the world. There is even some concern in Brazil about children supporting English teams. We had some talks with some sides in the past, but I’m happy at PSG now.

Marquinhos was speaking in the March 2015 issue of FourFourTwo magazine. Subscribe!