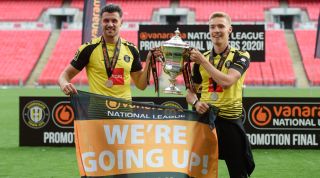 THEN TRY Quiz! Can you name every club Thierry Henry scored against for Arsenal?

It's been an excellent season for some of Yorkshire's finest.

Leeds United finally broke the hoodoo and got promoted to the Premier League in style, where they'll meet Sheffield United, who stunned everyone in their first term back in the big time. The Premier League Golden Boot even went to Sheffield-born Jamie Vardy - not bad.

Much further down the pyramid however, Harrogate Town have bucked the odds to join the EFL. Promoted into League Two via the lengthy play-offs, they join Barrow in League Two next season.

Our question for you today, is who else has played in the Football League - that's Championship, League One or League Two football - over the last 10 years.