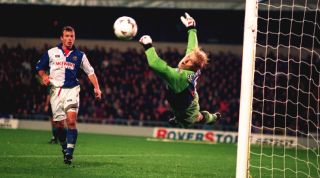 You've got 10 minutes on the clock to try and name as many of the 40 answers we're looking for.

1995 was the peak of the decade for many, and not just Blackburn Rovers fans. Blur and Oasis were battling for chart supremacy, Alan Shearer was England's talisman and we could actually go out.

It was 25 years ago, but what do you remember of the 1994-95 season, exactly? Aside from Blackburn winning the league and Eric Cantona getting himself into hot water at Selhurst Park.

We've compiled some of the key players, managers and clubs of the time and separated them into categories. All we're looking for are 40 answers to everything you need to know about 1995...