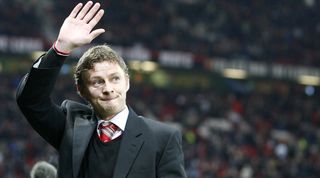 Cardiff's new Norwegian boss spent a glorious 11 years at Old Trafford after joining from Molde as an obscure little 23-year-old in summer 1996. But Fergie knew what he was doing, of course - The Baby-Faced Assasin would net 91 times in 235 appearances (and quite an important one in a 1999 final... what was it again?) despite a string of injuries which often limited playing time to bit-part appearances off the bench.

Now, though, it's the dugout where the popular 40-year-old resides. So what's he up against? Er, well, just ask this lot how their managerial returns to Old Trafford went...

As an Arsenal player, Graham won the club's famous Double in 1971, but the Scot's two-year spell with Manchester United was wholly unsuccessful as the club were relegated to the Second Division. After his £120,000 move from Highbury, Graham made 43 appearances in two years from 1972-74.

He returned to Old Trafford in his first season as Gunners boss, but on this occasion the tables were turned and an unsuccessful visit was settled by home goals from Gordon Strachan and Terry Gibson in a 2-0 win.

Robson’s £1.5 million transfer from West Brom in 1981 broke the British transfer record - but it's fair to say the investment was worthwhile. The midfielder soon became a firm favourite among the United faithful, and perhaps the club's finest-ever skipper (hence the famous Captain Marvel tag). The Durham-born dominator went on to win two league titles and three FA Cups, before transferring to Middlesborough in his twilight years.

But when Robson returned to Old Trafford as Boro boss, the hosts ran out 2-0 winners thanks to goals at the end of each half from Gary Pallister and Andy Cole. Loyalty, eh? Overrated.

Like those before him, though, the fiery-haired Scot's first visit to Old Trafford as a manager ended in disaster. His Coventry fudged two own goals in the first five minutes through Gary Breen and Eoin Jess, and went on to lose 3-1. Darren Huckerby's 86th-minute strike was a mere consolation after Karel Poborsky had made it three straight after half time.

Coppell enjoyed a successful career at Old Trafford as a member of Tommy Docherty's exciting young side of the mid-to-late 70s. In eight years he racked up 322 appearances, winning the Second Division title in his first season, an FA Cup runners-up medal in his second and eventually lifting the trophy in his third against treble-chasing Liverpool.

Fast forward to Coppell's managerial career, meanwhile, and a trip to Old Trafford for his newly promoted Crystal Palace side. True to form, the former United man couldn't steer the south Londoners away from defeat as goals from Teddy Sheringham and a Hermann Hreidarsson own goal gave the hosts a 2-0 win.

Bruce enjoyed a successful nine-year stint at United after signing from Norwich in 1984. He racked up 309 appearances at the heart of the Reds' defence, scoring a surprisingly good 36 goals along the way.

But Bruce’s first managerial apperance at Old Trafford ended in defeat (obviously) as his newly promoted Birmingham side lost 2-0. Goals from Diego Forlan and some chap named Beckham ensured United ended a run of back-to-back defeats to take all three points.

Hughes started his career at United and quickly made a name for himself by netting on his debut against Oxford in November 1983. Impressive performances attracted interest from abroad, and Hughes took in short spells with Barcelona and Bayern Munich before returning to United, where he bagged another 116 goals in 352 appearances.

Hughes’ first encounter at Old Trafford as manager ended in a 0-0 stalemate (hooray!) as his Blackburn side frustrated the title chasers and earned a hard-fought point. The following season Hughes' men would do the Double over Fergie's frustrated runners-up.

One of United’s all-time greatest leaders (just try getting Sir Alex to say that now), Keane enjoyed a distinguished 12-year career after joining from Nottingham Forest in 1993. He led United to nine major honours, making him the most successful captain in the club’s history.

Keane returned to Old Trafford with his first club in management, Sunderland, who'd risen from the Championship under the Irishman's stewardship. Nevertheless, Keane saw his side lose 1-0 courtesy of Louis Saha's 72nd-minute winner.

Ince was a strong presence in United midfield alongside captain Robson. His feisty tackling and raking passes cemented his place in a successful United side that won several major honours in the 1990s.

Ince’s managerial spell with Blackburn was brief - just 177 days, in fact - but it was enough time to face off against his former club in this League Cup quarter-final. It went badly. Carlos Tevez stole the show by netting four goals in United's 5-3 win, Rovers fans spent much of the game calling for their manager's head, and were duly satisfied a fortnight later when The Guvnor got the chop.