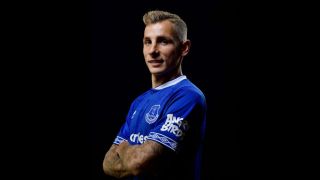 Lucas Digne has ended his two-season stay with Barcelona to sign a five-year deal with Premier League side Everton, the Toffees have confirmed.

Barca announced the France international left-back was sold for an initial fee of €20.2million, with a potential €1.5m in add-ons.

Digne joined Barca from Paris Saint-Germain in 2016 after he spent the previous campaign on loan at Roma, but he has largely been forced to play a back-up role to Jordi Alba, making just 12 appearances - eight from the start - in LaLiga last term.

Having signed the 25-year-old for a reported €16.5m, the Spanish champions have still turned a healthy profit on Digne, who now hopes to use his experiences at Camp Nou to benefit Everton.

"Everton is a big club with a great history. I want to play games, win games and excite the fans with the quality of our football," Digne told Everton's official website.

"I played good football in Rome and I played well, too, in Barcelona. I progressed a lot as a player and as a person by playing with the best players in the world.

"When you play with the best players it helps you build your character and, of course, it helps on the training ground and during games, too, because you want to give the best of you.

"I want to show my best football here and discover the best league in the world. Everybody loves the Premier League. I am loving the fact I am coming here."

Digne will be seen as the long-term replacement for Leighton Baines, who turns 34 in December and only managed to feature 22 times in the Premier League last term.

He becomes Everton's second signing of the season after Richarlison, who arrived from Watford for a reported £50m fee.