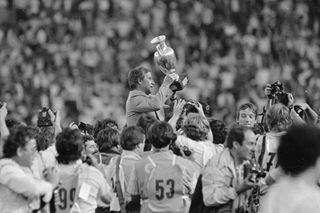 Michel Hidalgo, who led France to their first major title at Euro 1984, has died at the age of 87, the French Football Federation has announced.

“Today we learn with immense sadness and deep emotion of the death of Michel Hidalgo,” FFF president Noel Le Graet said on the official Federation website.

“The Federation, our football is in mourning. Michel Hidalgo is one of the biggest names in French football.

“He made history in international football with the first major title won by our French team.

“Through his philosophy of play, his personality, his exemplary passion, he contributed to the influence of our sport on the international level and to its popularity in France.

“He was able to provide us with emotions that are etched and will remain etched. He will remain in our memories as a symbol, a coach, a benchmark coach, lover of beautiful play, close to the players.

“He was a man of great and beautiful humanity, a person very rare that I had the pleasure of knowing. On behalf of the French Football Federation and all of French football I extend my sincere condolences to his family and loved ones.”

Hidalgo was born in Normandy in March 1933 and played for Le Havre, Reims and Monaco in a distinguished 14-year playing career between 1952 and 1966.

Hidalgo also won the Coupe de France twice at Monaco, in 1960 and 1963, but his international playing career was limited to just one appearance in 1962.

Having moved into the dugout, Hidalgo led France at two World Cups – in Argentina in 1978 and in Spain in 1982.

In one of the tournament’s greatest-ever games, France drew 3-3 in the 1982 semi-final with West Germany before losing 5-4 on penalties.

It was a cruel irony that goalkeeper Harald Schumacher proved the German shoot-out hero when he should have been sent off for rushing out of his goal and leaving Patrick Battiston unconscious with a reckless challenge.

After Euro 1984 and being named European manager of the year, he passed the reins over to Henri Michel but stayed on as technical director of the national team until 1986.

Hidalgo spent five years as Marseille director of football before ending his career in 1991.

“With unparalleled kindness and benevolence, Michel Hidalgo will leave a big void,” Marseille posted on their official Twitter account.

“Olympique de Marseille extends its deepest condolences to his family and loved ones.”