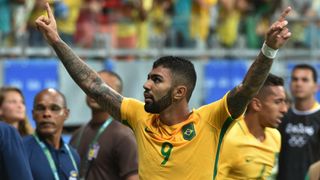 Gabriel Barbosa says he preferred Inter over Juventus due to the exciting project on offer at San Siro.

The Brazil international could make his Inter debut at home to Bologna on Sunday after he was an unused substitute for their 2-0 win at Empoli on Wednesday.

The striker nicknamed 'Gabigol' was in demand prior to his move from Santos last month, with Barcelona and Juventus also among the clubs reportedly chasing him.

Gabriel, though, was tempted by the challenge of helping Inter return to the top of the European game.

"I moved for the project," the 20-year-old said to Fox Sports.

"Inter want to return to being a very strong team and because of that, I decided to go to Italy with my family.

"There are great players like Antonio Candreva and Mauro Icardi who score a lot of goals. And also Eder, who is Brazilian like me.

"I had a crazy welcome at the airport in Milan and at that point I did not know I would be an Inter player.

"I am happy with my choice, I think I have come into a great team which I have always heard good things about. This is why I preferred Inter to Juventus.

"I was told that the strongest rivalry is with Juventus and not AC Milan.

"I decided to leave Santos because I thought I had stayed for quite a long time and learned quite a lot of things. I did what I felt was right."