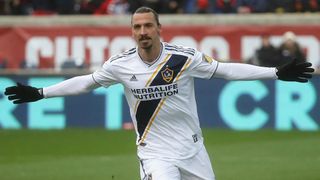 Zlatan Ibrahimovic has been named the MLS Newcomer of the Year, ahead of Wayne Rooney.

The LA Galaxy striker edged out former England captain Rooney in the voting for the 2018 prize, which is awarded to the player with previous professional experience to have impressed the most in his first season in the United States.

Ibrahimovic joined Galaxy from Manchester United in March and scored twice on his debut against Los Angeles FC, including a spectacular strike from 40 yards.

The 37-year-old ended the season with 22 goals and 10 assists in 27 appearances, earning 36 per cent of the votes for the Newcomer award, despite Galaxy missing out on the play-offs.

Rooney came second with 32 per cent, having inspired DC United to a postseason place after joining from Everton. Carlos Vela of LAFC came third.

The award is decided by votes from MLS club management, selected media, and current MLS players.

Rooney and Ibrahimovic were earlier named in the MLS Best XI for the season.