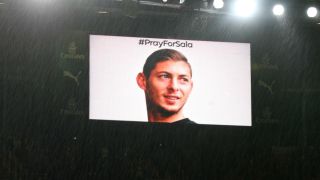 Cardiff City manager Neil Warnock said it was important his team gave a good account of themselves for missing striker Emiliano Sala in Tuesday's 2-1 defeat to Arsenal.

The match was the Bluebirds' first since Sala's plane disappeared when travelling back to Cardiff from Nantes last Monday after he said his farewells to his former colleagues having completed a move to the Premier League side the weekend before.

The search was called off on Thursday, before a private operation was started three days later when Sala's family reached a €300,000 crowdfunding target.

There were tributes to Sala before the game, as daffodils were handed out with the official match programme, while Arsenal included his name in Cardiff's squad.

And Warnock felt the team did Sala proud on the pitch.

"We talked about Emiliano before the game and I thought it was appropriate that we gave a good account of ourselves against a good side and I thought we could've won the game," Warnock told BBC Sport.

"What a performance, if Arsenal had our chances they would've beaten us by four. Nineteen shots at the Emirates, it's definitely our best performance of the season."

Pierre-Emerick Aubameyang and Alexandre Lacazette were on target for Arsenal, before Nathaniel Mendez-Laing scored a consolation in second-half injury time for Cardiff.