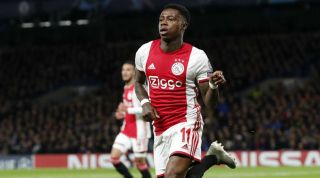 Ajax attacker Quincy Promes has admitted he'd like to play in the Premier League in the future - Liverpool and Arsenal are reportedly interested.

Promes only joined Ajax last summer from Sevilla in a deal worth £14m but has already expressed Premier League aspirations.

Ajax had Promes on their books for six years when he was a youngster and now he's making waves in Amsterdam once again.

He spent a total of five years away from the Eredivise, having joined Spartak Moscow from FC Twente in 2014.

The winger revealed his interest in English football after Ajax's stunning 4-4 draw with Chelsea at Stamford Bridge in the Champions League midweek.

Promes was amongst the Ajax scorers that night as Chelsea staged a famous comeback before their matchwinning goal was ruled out by VAR.

"We didn’t lose. It was really important for us not to lose," Promes told the press after the game.

"We did it and I am really proud of the guys. I think the way we fought together, it is not easy to run up and down with nine men. My team-mates were hard workers."

The Netherlands international has had an impressive season so far, scoring 11 goals in 17 appearances in all competitions.

Liverpool and Arsenal have been linked with a move for the 27-year-old, according to the Daily Mail.

They will be buoyed by Promes' apparent hunger for a move to England.

"To me, if I have a chance, maybe in the future," Promes told reporters when asked about potentially playing in the Premier League.

Promes has a contract at Ajax until 2024 so he won't come cheap, especially if he continues his prolific goalscoring form.

What next for Mesut Ozil? 7 players ostracised by Arsenal

James Milner interview: "We don’t want to be remembered as the team that won the Champions League once"