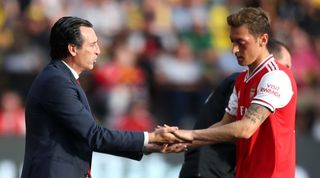 Mesut Ozil isn't the first Arsenal player to fall out of favour, and now Granit Xhaka unlikely to be the last. Here are a few others who found themselves frozen out in North London, going all the way back to the 1970s.

In 1970, with Arsenal’s crop of homegrown youngsters finally beginning to fulfill their potential and winning the Fairs Cup, the classy Suffolk midfielder played a key role in the two-legged final against Anderlecht and netted a vital goal in N5. But the Highbury boo boys, impatient with his tendency to dwell on the ball in anticipation of the perfect pass, had already begun to make his life difficult.

Unlike contemporaries Radford, Armstrong, Storey et al, Sammels played only a peripheral role in the 70-71 Double campaign, and Bertie Mee later admitted: “I left him out of the side towards the end for his own good”. In the close-season, Sammels quietly signed for Leicester to escape his Highbury torment.

“Alan was a very funny man,” recalled former Gunners boss Terrry Neill, “but his vicious Yorkshire wit could hurt.” As the 83-84 campaign got underway, Neill was running out of patience with his mercurial ‘79 FA Cup Final winner, arguing: “He’d start the week in training with real gusto, and then lose interest by the end of the week.”

After some lacklustre displays, and a set-to with skipper Kenny Sansom at the Plymouth Holiday Inn prior to a League Cup tie, Sunderland was frozen out of the first team, firstly by Neill and then his successor Don Howe, before joining Ipswich on loan in February 1984. “It was time for him to go,” insisted a curt Don Howe.

‘Champagne Charlie’ may have netted a brace at Wembley against Liverpool to win Arsenal’s first trophy of the George Graham era - the 1987 Littlewoods Cup - but the fitful Nicholas knew that with the arrival of Leicester’s Alan Smith in April and the emergence of Paul Merson, his cards were marked.

After three poor displays alongside an equally listless Smith at the start of the 1987-88 campaign, Nicholas was permanently ousted from the first team. He was replaced - initially - by Perry Groves and then Merson, and headed to Aberdeen to salvage his career. The Gunners immediately beat Portsmouth 6-0 with Smith netting a hat trick. I was never George’s cup of tea,” he recalled. “He didn’t like my earring, my fashion sense, or my style of play.” Smith and Merson, meanwhile, formed a formidable double act as the Gunners won two Division One titles.

“You crossed George Graham at your peril,” admitted the skilful Arsenal midfielder several years later, “and I paid the price.” Initially singled out by his manager as “the player who can unlock European sides with his passing,” Davis was ostracised by Graham for the best part of 18 months after venturing too far forward during Arsenal’s 1991 European Cup loss at Highbury to Benfica. Deploring what he described as the Gunners’ “helter-skelter”, Graham held Davis responsible.

But he still rated the loyal midfielder highly, eventually reintroducing him to the first team picture as Arsenal won both domestic cups in 93, and the Cip Winners Cup In 94. “I’d always want Paul in those high pressure matches,” Graham explained. Ruthlessly pragmatic, was George....

Bought in the summer of 1990 to replace Brian Marwood (who was spending too much time on his PFA duties, according to a distinctly unimpressed George Graham), the ‘Super Swede’ delivered some stellar performances for the Gunners as Arsenal romped to the title in 1991. But the danger signs were already there, with Limpar and Graham repeatedly clashing over the winger’s work ethic and desire to play friendlies for his country. Over the next three years, Limpar flitted between the first team and the subs’ bench, before being (as good as) cast out altogether in early 1994. There was one final salvo that March, with Arsenal netting 9 goals altogether in Limpar’s final two matches. It was too little too late. Graham sold him to Everton, refusing to shake his hand, and Limpar later described playing under the Scot as being “like living in Iraq under Saddam Hussein.” A disturbing image, but not quite so alarming as seeing a hapless Eddie McGoldrick play in Limpar’s berth for most of the campaign.

The burly young Welshman was never going to be Arsene Wenger’s idea of a forward after the Frenchman became Gunners boss in September 1996. An injury to Dennis Bergkamp gave Hartson a chance to impress his new manager, but Hartson was cumbersome, failed to score, and simply wasn’t quicksilver enough for the new Arsenal. Hartson also expressed annoyance that balls weren’t being put onto his head. “It’s far more of a passing game now,” lamented Hartson, whose appearances became even more sporadic before he was sold to West Ham in late February.

Unai Emery and the mercurial German have been engaging in an essentially pointless footballing cat-and-mouse game for a year now. Initially, Ozil looked to be headed out of the Emirates during the last two transfer windows. However, dissuaded by his astronomical wages, and Ozil’s seeming reluctance to depart North London, potential buyers have been put off. Ozil has barely featured at all this season, but returned for games against Liverpool and Wolves after Emery insisted the 31-year-old has been a little less lacklustre in training over recent weeks.

The Spaniard is in a difficult position, keen to stamp his authority on the club, but aware that an in-form Ozil (an increasingly rare thing) would add some desperately needed creativity to his ailing team. With the melodrama enveloping the club, and a febrile fanbase, it’s not impossible that the cold-shouldered Ozil will outlast Emery at Arsenal.

QUOTES Nicklas Bendtner: Mesut Ozil "loved ladies" and "knows how to fire it" in nightclubs