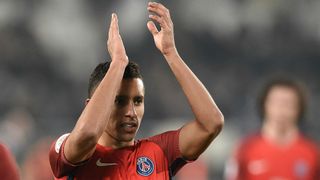 Paris Saint-Germain are ready to give "110 per cent" to beat Barcelona in the Champions League last 16, defender Marquinhos has said.

Unai Emery's side warmed up for Tuesday's clash at Parc des Princes with a commanding 3-0 Ligue 1 victory over Bordeaux on Friday, which came courtesy of a double from Edinson Cavani and a goal from Angel Di Maria.

With PSG on a run of four wins in a row in all competitions, Marquinhos believes they are in good shape to take on a team who knocked them out of Europe's top competition in 2013 and 2015.

"These are matches where you play the details," said the centre-back, as quoted by L'Equipe. "You have to be at 110 per cent and you can't make mistakes.

"On the other hand, they have a team with players who can make a huge difference.

"We'll rely on our supporters, we'll try to be at 110 per cent. We have to play the match of our life.

"We know they're a very high-level team. For us defenders, it's a great test."

Asked about the form of Cavani, who has now scored 25 goals in Ligue 1 this season, he said: "Cavani is in great shape but it's the collective that makes the difference. There were a lot of chances from the last game but the level of the team doesn't change."

Full-back Thomas Meunier believes PSG proved they will be a handful for Barca with the adaptability they showed in Friday's victory.

"I think it was a good preparation for Barca. We saw an in-form PSG who were good at the back, switched things up by playing long and short. It was a good performance and it bodes well for Tuesday," he said.

"There's no hierarchy for places on the pitch. Everyone works hard in training for places. It doesn't matter if it's me or Serge Aurier against Barca, it's the team that comes first.

"We have a similar style of play to Barca, we have a possession-style and a lot of quality individuals. We'll certainly have our chance."

Marco Verratti marked his first Ligue 1 start since January 21 with an accomplished display and he set up Di Maria's goal with a fine throughball.

"I want to thank the medical staff and the coaching staff," said the Italy international. "At first, I didn't think I'd be there [against Bordeaux].

"Everything went well. I feel really good. I've worked a lot. I feel ready for the match."