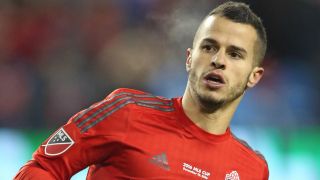 Sebastian Giovinco was on target as Toronto extended their winning streak to a club record six games after edging Minnesota United 3-2.

Former Juventus forward Giovinco opened the scoring on Saturday but Tosaint Ricketts was the hero again for Toronto at BMO Field.

After his late double downed Columbus Crew midweek, Ricketts was at it again, with his 77th-minute strike sinking Minnesota, who led through Kevin Molino's second-half brace.

The Fire, Revolution and Union had no trouble scoring on the weekend.

A four-goal first half saw the Revolution to a 4-0 demolition of slumping Real Salt Lake – ending a streak of five games without a win, while the Union were also 4-0 victors at 10-man DC United.

Kaka was on target as Orlando City were held to a 2-2 draw by Sporting Kansas City and Colorado Rapids accounted for San Jose Earthquakes 3-0 thanks to Shkelzen Gashi's brace.

Highlights: City defend the fortress with a pair of goals against Sporting KC. May 14, 2017