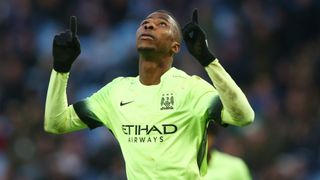 The Super Eagles' 1-0 loss to Egypt in March thwarted their hopes of reaching Gabon 2017 in a group reduced to only three teams following Chad's withdrawal for financial reasons.

But they at least got their first victory of the campaign at the Akwa Ibom Stadium on Saturday, having shared a goalless stalemate with Tanzania last September.

With nothing but pride at stake, it was the hosts who dominated and Salisu Yusuf's men spurned a multitude of chances before Manchester City teenager Iheanacho's illuminating 79th-minute intervention.

Iheanacho then brought a fine 25th-minute save from the impressive Aishi Manula as Nigeria continued to threaten.

The pattern of play was set and the half-time interval was merely a breather for Tanzania, who offered little in attack throughout.

Mikel headed over from close range a couple of minutes after the restart, while Manula again had to be alert to deny Iheanacho just before the hour mark.

Nigeria kept on pushing and it was Iheanacho who produced the goods as he finally got the better of Manula with a superb 20-yard effort that rattled the underside of the crossbar on its way in.

The visitors left it too late to apply pressure and Nigeria will now turn their focus to World Cup qualifying, which resumes against Zambia next month.