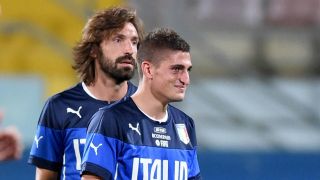 Andrea Pirlo says he cannot think of a player who plays the same way he does, including Paris Saint-Germain star Marco Verratti.

The midfield great, now playing for New York City, lamented the lack of playmakers in the modern game and feels PSG's Verratti is wrongly compared to him.

Even though he is a fan of the Italy international and others, Pirlo thinks the game's top midfielders possess different skillsets.

"People compare me to Verratti, and I do really like him, but we have very different playing styles," Pirlo said to Corriere dello Sport.

"I like Roberto Gagliardini at Inter too, but he has a different role to mine.

"To be honest, I don't see anyone out there who plays the way I do. There are many talented midfielders, but not the kind of playmaker I am."

Pirlo also discussed his former club Juventus and believes they have a good chance in this season's Champions League.

Juve face Barcelona in the last eight and the 37-year-old recalled the 2015 final defeat to Luis Enrique's men in Berlin – his last game for the club - as one of his greatest career regrets.

Pirlo said: "Juve can win the Champions League. They are up to the level of the others, if not above that.

"They are more tactically compact and can certainly go all the way.

"We were convinced that we could do it [in 2015] even if Barcelona had that trio in attack who could win the game at any moment. We started badly, but then got back on track, equalised and had the chances to win it.

"When you lose a final it is always bad, but for Juventus it was even worse. It had been such a long time since this club had won the Champions League.

"It was very painful for me too, as it would have been the perfect way to come full circle, achieving an objective I had set myself when I first joined the Bianconeri. After that night, I had nothing left."