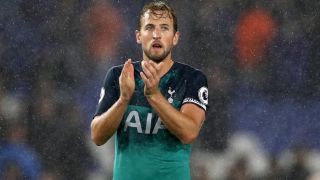 Kane had gone five matches without a goal for club and country before opening the scoring from the penalty spot in Spurs' 2-1 win over Brighton and Hove Albion on Saturday.

The England international, who has been prolific in recent seasons, took his tally to three this campaign.

"Always for me Harry is one of the best. He is one of best players in our team. I don't have doubt," he told a news conference.

"It's always a guarantee to have him on the pitch, because he's a special player.

"For me he's a great player, not because he scored. When he didn't score in the past it was the same."

: "It was massive for momentum. The energy was great and we got what we deserved. We had to fight until the very end and sometimes that makes it feel that bit sweeter." September 22, 2018

Erik Lamela came off the bench and scored for the second straight Premier League game, before Tottenham conceded late as Anthony Knockaert struck.

Pochettino was happy for the Argentina international, saying: "I hope that he feels well and can add his quality every time that we demand his quality.

"I am happy for him because it was a great goal. He finished an action that was fantastic from the team and that's why I am so happy."

Spurs are fifth in the Premier League, six points behind leaders Liverpool.