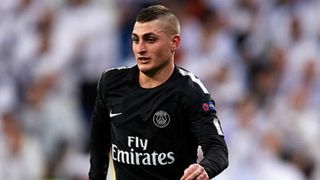 Marco Verratti said he could be sold by Paris Saint-Germain as the star midfielder refused to dismiss links with LaLiga leaders Barcelona.

Verratti was reportedly close to joining Barca in the off-season after former agent Donato Di Campli described the Italy international as a "prisoner" at PSG.

The 25-year-old eventually apologised and has since helped PSG move 12 points clear atop Ligue 1, though rumours of a move to Spain persist.

Asked about the speculation following PSG's 3-1 first-leg loss to Real Madrid in the Champions League last 16 on Wednesday, Verratti told Premium Sport: "Barcelona? I don't know, I am happy here in Paris.

"I believe in this project and I hope to stay here long. Maybe PSG will sell me but let's see."

Verratti was speaking after PSG conceded twice during the final seven minutes at the Santiago Bernabeu.

Adrien Rabiot had given the French visitors a 1-0 lead in the 33rd minute before Cristiano Ronaldo equalised via the penalty spot on the stroke of half-time.

PSG controlled proceedings for much of the second half until Madrid head coach Zinedine Zidane turned to his bench, introducing Gareth Bale, Marco Asensio and Lucas Vazquez.

"I think 1-1 was fair for the first half. After the break, I think we deserved to win, but we lost 3-1," Verratti said. "When you play against a big team, you have to be clinical. We still have a good chance, and we need to have confidence at home.

"We've already had teams come back against us twice in the past, so we can do it ourselves. We're disappointed, but there's still another game to come."