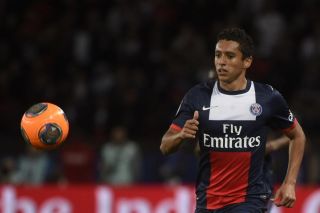 Marquinhos arrived in the French capital from Roma in July and made 32 appearances in his debut season - winning both Ligue 1 and the Coupe de la Ligue.

However, the French champions announced that a deal had been reached on Friday to sign Luiz from Chelsea - adding another central defender for Marquinhos to compete with next term.

The Brazilian trio of Thiago Silva, Luiz and Marquinhos will vie for spots in Laurent Blanc's defence next year and the former Corinthians man expects a tough challenge to play regularly.

"(Luiz) is a great guy and a great player. Besides, I think he made the right choice by committing to PSG," he told Le Parisien.

"Now when you see players like David Luiz arrive, it looks even more difficult for me but I'm happy in my head and I will work more."

Marquinhos, unlike Luiz, is not in Luiz Felipe Scolari's squad for the FIFA World Cup - having made one appearance for his country in a friendly against Honduras last year.

He has been the subject of regular speculation linking him with a move to Barcelona and the defender stated he will discuss his future at PSG with the club.

"I have a contract that goes until June 2018. We will talk with the club and my agent about my future because this is a very important season for me," he added.

"If Barca are interested in me, obviously, it's something that's nice.

"It's flattering because Barcelona are a club that has won all the competitions in the world. Other than that, I cannot say anything else about Barca."