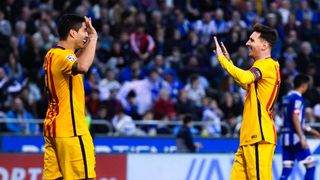 Luis Suarez never expected to replace Lionel Messi as Barcelona's number nine when he moved to the Spanish giants from Liverpool in 2014.

Suarez has made remarkable improvements on already good form since swapping Anfield for Camp Nou and capped off a second successive La Liga-winning campaign with the Pichichi Trophy, awarded to the top goalscorer.

Suarez scored 40 goals from 35 appearances in the league this season, pipping Real Madrid's Cristiano Ronaldo to the award with a hat-trick on the final day of the league season and, more remarkably, usurped Messi as Barca's preferred central striker in the process.

Five-time Ballon d'Or winner Messi has moved back out to a role on the left side of attack to get the best out of Suarez, much to the Uruguayan's shock.

"I never imagined playing in this position because Leo was playing as the 'nine', and I thought, 'where are they going to play me?'," he told BeIN Sport.

"We get along very well, both on and off the park.

"Sometimes it is hard to understand, because a striker is always angry when they’re not the main star, but here it does not happen like that.

"There is nothing false or acted. It is a true friendship, where there is zero jealousy and where we get along well.

"We advise each other and we are glad when things go well for each other.

"For me, I tell my children I played with the best player in history and that is a privilege."

Suarez also discussed his controversial bite of Giorgio Chiellini at the 2014 World Cup in Brazil and expressed his humiliation at the incident, but said he was pleased with how he reversed his fortunes.

"It was very painful, especially when I was aware that I was wrong," Suarez said.

"What hurts me most is the way I was treated. [The suspension] was difficult, but I took it as I had to.

"Then I thought, 'I am privileged', with how I reversed it. I think that not everyone could have reversed the situation as I have."