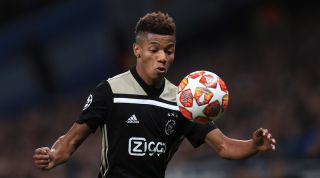 Liverpool have been keeping tabs on David Neres who, over the last couple of seasons, he has helped Ajax to a number of domestic titles.

Many members of that team were picked off by Europe's elite clubs, but Neres remained in Amsterdam.

The Brazilian has already scored two goals from wide this season and is valued at around £40 million.

Liverpool could face competition for Neres' signature, however, from Premier League rivals Tottenham Hotspur, according to Calcio Mercato.

Spurs saw Neres up close last season, as they played Ajax over two legs in the aforementioned Champions League semi-final.

Tottenham have endured an unsure start to the season, with Tuesday night's 7-2 defeat at home to Bayern Munich a particular low point. The club are believed to be looking at transfer targets already.

The 22-year-old Neres could offer some fresh impetus to the North London side with his direct and dynamic style of play.

However, competing with Liverpool poses a serious hurdle for Spurs. The Champions League winners didn't spend much last summer and will be looking to make a statement come January.

Spurs will take confidence from the fact they could be able to offer Neres something Liverpool can't: regular football.