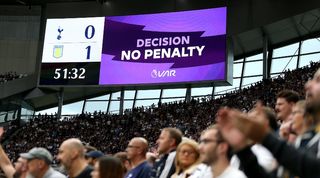 It’s now more than two months since journalists and supporters were invited to Stockley Park to be briefed on the Premier League’s approach to implementing VAR. It was a good day. It was interesting and instructive and, best of all, it showed that the league was on roughly the same page as the public.

In the time since, though, during this first practical roll-out, a difference has appeared between the aims presented that day and the current reality.

The core issue is the working definition of a clear and obvious mistake. Back in August, the PGMOL promised a ‘high bar’ and minimum interference and, at the time, that was welcome. After all, the tournaments in which VAR had been used in the months prior had all been punctuated by long delays, frivolous replays and, inevitably, complaints.

But the aversion to those issues has created a different kind of problem. Across the course of another Premier League weekend, it seems certain that the following scenario will reappear: a foul will be committed in the box, a penalty should be the logical outcome and yet, because the clear and obvous threshold isn’t reached, nothing will be given.

As it was last weekend, when Aaron Cresswell grabbed a fist full of Josh King’s shirt at Dean Court. Or earlier in the season, when Jamaal Lascelles committed that comedically flagrant foul on Harry Kane at the end of Newcastle's win over Tottenham. Or at Anfield in early September, when Lascelles was involved again, this time in wrestling Joel Matip to the floor.

Those were penalties. They may not have represented egregious misjudgements by referees, but to pretend that they were anything other than fouls would be disingenuous. So, while the need to protect the flow of the game is extremely important, the introduction of this form of wilful denial is counter-productive – because of how contrasting it is with VAR’s general mentality and, also, because that kind of idiosyncrasy is so antagonistic.

One of the other, more common debating points is the application of the offside law. The PGMOL were clear that this would always be factual and, while some of the decisions have been ludicrously pedantic, without a workable alternative there isn’t really a solution. But the real problem with that millimetre-by-millimetre mentality is just how it contradicts the use of VAR in other areas. On the one hand, goals are being ruled out because players are being proven to be standing offside by an inch or two. We have to accept that now. On the other, the same officials are remaining purposefully blind to infringements because of some sense of duty to the spectacle. And we have to accept that too.

That contradiction cannot remain so sharp; there has to be a compromise. Until one is found, VAR will not be accepted. Instead, it will be perceived as a shill for the vanity of referees and as a utility used too much in all the wrong areas, and not enough in the right ones. Why, for instance, was it imperative to stop and restart the game when Lukasz Fabianski strayed marginally north of his goal-line before saving that penalty on the season's opening day, but out of the question to do so for any of the incidents mentioned in the paragraphs above?

It’s an exhausted topic, but still an important one. People are being confused and they're having their affection for the game eroded as a result. The arguments about disallowed goals are part of that and the points raised about spontaneity, delays in celebration and interfering with the game’s natural energy are certainly all valid. More critical, though, is this current sense that VAR is illogical - that it is the most tedious of enemies: all powerful when it doesn't need to be, impotent when it does.

That must change. Like any new product, VAR has to be sold properly to the public and, at the moment, that isn't happening.