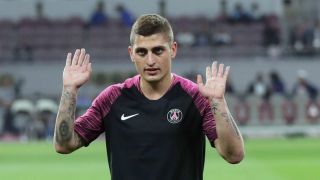 Marco Verratti has returned to training with Paris Saint-Germain, giving the Ligue 1 leaders a timely fitness boost ahead of next month's Champions League clash with Manchester United.

Verratti limped off during a game against Guingamp last month and was diagnosed with a sprained ankle, making him a doubt for the last-16 tie against United.

But the Italy midfielder trained with his team-mates on Monday and could be fit to play at Old Trafford on February 12.

Thomas Tuchel is expected to be without Brazil forward Neymar for both legs, however.

The world's most expensive player suffered a recurrence of a foot injury in a Coupe de France win against Strasbourg last month.

Verratti was absent as PSG lost for the first time in Ligue 1 this season, falling to a 2-1 defeat away to Lyon on Sunday.

Look who's back training with the squad!

Some #MondayMotivation for you, courtesy of Marco Verratti