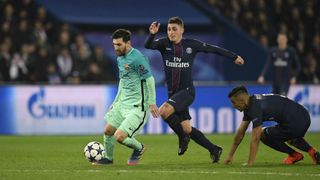 Marco Verratti has denied expressing an interest in joining Barcelona, insisting his desire is to be successful at Paris Saint-Germain.

Ahead of PSG's Champions League meeting with Barca on Tuesday, quotes attributed to Verratti suggested he would find it difficult to turn down a move to Camp Nou.

The Italy international's agent Donato Di Campli also warned he could leave the Parc des Princes should they fail to succeed in Europe's premier club competition.

However, in the wake of the 4-0 triumph over Luis Enrique's side, Verratti denied that was the case and affirmed his commitment to the Ligue 1 giants.

Verratti said: "An article implied that I was dreaming to play for Barcelona. I've never said that. My dream is to win here.

"Even if we hadn't won [on Tuesday], I wouldn't have thought otherwise. I trust the club and the project.

"When you are a part of a great project you feel very good about it. In my opinion, winning here is going to be different than winning in all the other clubs."