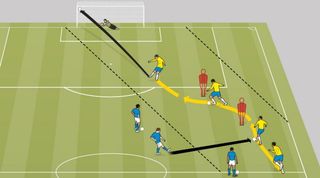 Mark out a diagonal channel from the wing towards goal. Within the channel, place two mannequins six yards apart on the route to goal, outside the 18-yard box. Three passers stand ready, one central and level with the attacker, one deeper in midfield and the third behind the attacker at full-back.

The attacker, 'Neymar', receives a firmly hit pass. His first touch must take him past the mannequin, then he must beat the second mannequin with a stepover and shoot immediately after knocking the ball past it. He has nine goes – three from each passer – to score as many goals as possible without the ball leaving the channel, and without needing two touches to beat the first mannequin.

This replicates the action of cutting in from the wing, mimicking a game situation while also testing a player’s ball control, finish and speed in changing direction.