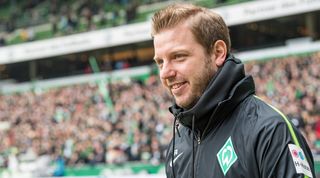 Schalke fans could hardly believe it when their club named an anonymous 32-year-old as their new coach last summer. Granted, Tedesco had managed to save Erzgebirge Aue from relegation to the third division in truly remarkable fashion, but did that make him ready for one of the most demanding jobs in German football? Apparently, it did.

Sporting director Christian Heidel regularly gives chances to unknown young coaches, having promoted both Jurgen Klopp and Thomas Tuchel while at Mainz. This was his boldest gamble yet, though, and it’s paid off handsomely – the Royal Blues are on the verge of qualifying for the Champions League and are currently second to Bayern Munich in the Bundesliga.

The Italy-born Tedesco, who never played professionally, has a BA in business engineering and previously worked for Mercedes - but his degree likely won't be needed again in this astonishing career of his.

Simply, Machin is a local hero in Catalonia. Having saved Girona from relegation to the third division in 2014, he's made revolutionary changes at the modest club, helping his team to play organised and attractive football.

Heartbreakingly, they failed in the 2015 and 2016 play-offs, but were finally promoted to La Liga for the first time in their history last summer. Girona are now enjoying a superb debut season sitting proudly in the top half of the table. Machin is only 43, and the cooperation between Girona and Manchester City won't do his career any harm. Expect him to coach a top club eventually.

Werder seemed almost certain relegation candidates at the beginning of the season, and fans were pessimistic in the extreme when Kohfeldt replaced Alexander Nouri as manager in late October 2017. The team were winless and hopeless, but now their place in the Bundesliga is safe. In fact, Werder have been one of the best teams in Germany over the second half of the season, with six wins in their last nine matches.

Aged just 35, Kohfeldt has never played professional football, and coached various youth teams at Bremen for a decade before he got the top job. Now he has suddenly become Werder’s messiah, and his team is very good tactically – Kohfeldt prepares specific surprises for different opponents.

It was only natural that Ten Hag was appointed Ajax coach in December 2017. Right now, the 48-year-old is the most original and unorthodox of all Dutch coaches; his ideas are a mixture of different philosophies.

Formerly a tough defender at Twente, Ten Hag served as assistant to Fred Rutten at PSV Eindhoven, then led modest Go Ahead Eagles to promotion and moved on to Bayern Munich's reserves. That's where he met Pep Guardiola, and also impressed the then-sporting director Matthias Sammer.

Upon returning to Holland in 2015, Ten Hag implemented some of Guardiola’s principles at Utrecht, leading them through two magnificent seasons that included a KNVB Cup final appearance in 2016. Humble yet charismatic, he has started his Ajax career positively. A lot is expected from him in the coming years.

Brugge fans were generally disappointed when 40-year-old Croat Leko was named as coach last summer. Granted, he used to play for the club, but his inexperience was definitely against him. How wrong they were to doubt him.

With Leko on the touchline, the blue and blacks suddenly flourished, playing the best football in Belgium by a distance and getting phenomenal results at the top of the table. He is tactically flexible and a great motivator, proving himself as an ambitious coach with boundless self-belief. Winning the league title in his debut season would be a great achievement; the sky's the limit for him thereafter.

He looks like Luciano Spalletti, and could be just as inspirational: Cardoso is yet another face in the seemingly endless line of Portuguese coaches who have never played professionally themselves. Having served as an assistant at numerous clubs, he made a name for himself in rather unusual fashion by moving to the youth team of Shakhtar Donetsk in 2013. Cardoso worked as an assistant to Paulo Fonseca last season, before returning to his homeland in 2017.

In his debut season as chief coach in his own right, the 45-year-old has made a huge impression at Rio Ave – his possession-based style has helped the modest club climb to the dizzy heights of fifth in the Primeira Liga. Cardoso – softly spoken, unorthodox and charismatic – is currently the darling of the Portuguese press. He should get his chance at a bigger club very soon.

That's where Pimenta made Norwegian friends, which eventually led to him starting his coaching career in Scandinavia. Kongsvinger, of Norway's second division, gambled on him in 2014, and Pimenta led them to the verge of promotion plus – even more sensationally – a Norwegian cup final appearance.

This year, the 36-year-old took another interesting challenge at newly promoted Swedish outfit Brommapojkarna. We should hear a lot more about him in the future.

During his playing career, Semak was one of the most liked and respected players in Russia – a born leader who captained the national team that reached the semi-final of Euro 2008. Now, the man who won five league titles with CSKA Moscow, Rubin Kazan and Zenit is starting to make a name for himself as a coach as well.

Semak assisted Luciano Spalletti, Andre Villas-Boas and Mircea Lucescu at Zenit (as well as Fabio Capello and Leonid Slutsky with the national team) before finally taking over at tiny Russian side Ufa in early 2017. The results have been outstanding, and the low-budget outfit have avoided a relegation battle. The 42-year-old Semak is widely considered one of the top candidates to replace Roberto Mancini at Zenit.

The only top Austrian footballer born after the Second World War to be named Adolf – Hutter may not be entirely pleased with his parents, and prefers the shorter version 'Adi'. He has made a lot of headlines for the right reasons, however – both on the pitch (where he mostly starred at Salzburg) and now as a coach.

Young Boys haven't won the title since 1986, but they are on the verge of breaking the curse at the expense of heavy favourites Basel, playing magnificently attacking football. Hutter has been in charge at Young Boys since 2015 and made revolutionary changes to the club's vision. He should get a chance in the Bundesliga soon.

12 great footballers who won absolutely nothing in their careers

To put it simply, Pelissier is a miracle worker. In 2014 he led Luzenac, a club from a village of 500 people, to an incredible promotion to Ligue 2 – only to see his dream destroyed by the FA, who refused to allow the club to become professional because of stadium issues.

Heartbroken but not beaten, the coach moved to Amiens and led them to successive promotions. The northern club, from the town where French president Emmanuel Macron was born, were virtually unknown before. Now, though, they're playing attractive and positive football in Ligue 1, and are set to stay in the top division against all odds.

Could the 52-year-old be successful at a club that isn't outright underdog? That's the question around Pelissier now.