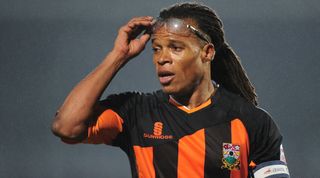 Top-level journeyman Anelka found himself at his 12th club in a seventh different county when he joined Indian Super League side Mumbai City in 2014. Less than a year later, the Frenchman was named boss – but it only lasted four months.

His exit came after a 1-1 home draw against Kerala Blasters knocked Mumbai out of the eight-team competition, but also among reports of Anelka’s altercations with both players and coaching staff. A shock to us all, of course.

Proof that even the greatest players don't always make great managers: 1966 World Cup winner Charlton was relegated from the old Second Division with Preston in his first season as manager in 1973/74. The team struggled so badly that lifelong Manchester United player Charlton came out of retirement to play 38 games for the Lilywhites, but even the great man couldn’t turn their fortunes around.

After just over two years in charge, Charlton left the club after falling-out with the board. He never took another permanent managerial job after that.

Davids was a perennial winner of trophies with clubs including Ajax and Juventus, so it was a massive surprise when he took his first job in management at then-League Two Barnet alongside Mark Robson in 2012. Robson lasted just two months, but the Dutchman stayed in north-west London for two years.

Davids and the Bees were relegated in his first season, before the second (in non-league) started with three red cards in his first eight games and him resigning in January. Bizarrely, he also wore the No.1 shirt, taking it off goalkeeper Graham Stack.

One of the few English players to truly succeed abroad, winning Ligue 1 with Monaco and playing under Fabio Capello at Milan, Hateley moved into management with Hull in the summer of 1997. Quickly, though, the relationship between player-manager and new owner David Lloyd (who appointed him) turned sour.

While many believed the intimidating frontman and Rangers legend did the best he could in difficult circumstances, the Tigers still endured their lowest ever finish of 22nd in Division Three. Hateley played in nine games without scoring during what was to be his only season in charge.

A little under 20 years after he was a World Cup winner with Argentina in 1978 (above) and at the age of 42, Kempes was convinced to take charge as player-boss at Albanian side Lushnja. The South American striker later admitted in his autobiography, El Matador, that he had to look up where the country was.

Kempes's stay lasted less than a month, coincided with riots as the country fell into financial ruin and eventual civil war, and ended with him escaping on a flight to Rome just before the airport closed. He took charge of two matches.

Having won the Champions League, Serie A (twice) and several Coppa Italia trophies during eight years with Sampdoria and Juventus, there was great surprise when Lombardo joined newly-promoted Crystal Palace in 1997.

There was even more when the bottom-placed Premier League side appointed him player-manager in March 1998 following a takeover. Tomas Brolin was his assistant and translator (with the Italian unable to speak English) and the season ended, perhaps unsurprisingly, in relegation after five defeats from his seven matches in charge.

OK, perhaps we're pushing the 'footballing great' thing a bit here. But still: after a well-travelled career, Claridge returned to hometown club Pompey in 1998, and two years later was named player-manager. That was where the fairy tale ended, however, and the striker was sacked after just 19 weeks having won five of his 23 league games in charge.

Not that it put him off. Spells in charge at Weymouth and Millwall (where Claridge was relieved of his duties before he took charge of a game) followed. Now aged 51, the evergreen Claridge is in charge at Salisbury and has amazingly played twice this season.

Aged 37, McAllister was given his first job in management in 2002 at a Coventry side already starting to slip down the divisions under debt and financial strain.

The Scottish midfield playmaker was given a three-year deal, no money for new players, and expectations of a top-six finish in the First Division. The Sky Blues would end up 20th that year and McAllister resigned six months later.

Appointed as relegated Forest manager in 1999, Platt decided to make a playing comeback during what would prove to be two rocky seasons at the City Ground. With the East Midlanders having just been relegated from the top flight, the former England international spent big money on flop signings – most notably Italian trio Gianluca Petrachi, Salvatore Matrecano and Moreno Mannini.

Platt didn’t help matters much on the pitch, with a straight red card for a crude foul against Sheffield United being his most notable contribution. With debt mounting, he left in 2001, and remains an unpopular figure among Forest fans to this day.

PREDICTED FourFourTwo calls the 2017/18 PFA Team of the Year

LIST 90 things we miss about football in the 1990s

One of the greatest players of all time, Romario won trophies with Barcelona, PSV Eindhoven and, most notably, the World Cup with Brazil in 1994. At the very end of his career, the striker returned to his hometown club Vasco da Gama in 2007 as player-manager.

Things started well and, despite being 41 at the time, the Brazilian scored three goals in six games – but suddenly left his position the following February. It later emerged that Romario had failed a drugs test, testing positive for the banned substance finasteride (the striker claimed he was using it to cure baldness).

In reality, a clash of personalities between Romario and Vasco da Gama president Eurico Miranda was thought to be the key reason for the Brazil icon’s swift demotion.