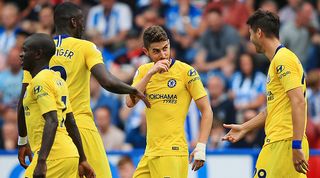 Everything makes sense in pre-season, but especially so in this case. Arsene Wenger used to approach the transfer market with far too much deference to his own ideals, and that probably prevented him from signing the kind of midfielder which Arsenal so obviously needed.

Torreira is that midfielder. The Uruguayan can play a bit, Sampdoria supporters will tell you as much, but his principle attributes will be focused on making his new team far more secure without the ball. Not before time, he’ll provide Unai Emery’s defence some much-needed protection.

Here’s why he deserves to be on this list: there’s a lot of merit in a team recognising that they have a deficiency and then spending a lot of money to correct it. It’s actually very smart.

It took over £60m to bring Alisson to Anfield but, given how long the goalkeeping issue has existed at Liverpool, they can hardly be criticised for paying top dollar for one of the finest players in Europe. The Brazilian’s transition into English football might not be smooth, as goalkeepers do traditionally struggle with that adaption, but the theory is very sound indeed.

Jurgen Klopp now not only has far greater security at the base of his formation, but also - crucially - a far better standard of distribution too.

Let’s be realistic: if Seri starts well at Fulham and enjoys a prominent first season at Craven Cottage, he’s not likely to still be there a year from now.

But so what? At £25m and at 27 years old, Fulham could very well flip him for an enormous profit should they want to. And, realistically, paying that kind of fee in the first place is hardly extortionate. In 2018, £25m for a continental-class midfielder who provides a two-way contribution is actually very reasonable - particularly so when considering the calibre of suitors who were also pursuing Seri and the fees attached to other, inferior players this summer.

And, of course, that ignores the more pressing, football need. Fulham manager Slavisa Jokanovic has some talented pieces – not least Ryan Sessegnon, Tom Cairney, Aleksandar Mitrovic and Andre Schurrle – but he needed more ability in the centre of midfield if they were to be prominent at the higher level. It’s ability he definitely now has, though. Seri is potentially a top-six player and Fulham have pulled off a coup.

It might not be the best transfer but it’s certainly one of the most interesting. Moutinho is possibly past his absolute best but, still just 31, he’s hardly past it. Jorge Mendes would, of course, have been instrumental in greasing the transfer wheels and Moutinho is presumably on a considerable basic wage, but positioning him alongside Ruben Neves in the Wolves midfield has helped to make them arguably the best-prepared newly-promoted side in Premier League history.

The Portugal international is still a very fine player and his metronomic distribution, playmaking and defensive attributes are arriving for a very reasonable price.

Meyer is in a bit of a Marko Marin situation. Once thought of as the next great German midfielder, his stock has sunk. His drawn-out and acrimonious departure from Schalke clearly caused a significant distraction and so, in a sense, he’s a reclamation project for Roy Hodgson and Crystal Palace.

But he’s still the right player moving to the right place. Palace have needed a central attacking midfielder for several seasons now, and with Ruben Loftus-Cheek back at Chelsea, Meyer should help to cover that loss. There’s a sense that this will either go really well or really badly, but the 22-year-old has the talent to make this move a success and, in Hodgson, now has a vastly experienced coach who understands football players better than most.

Leicester’s decline in the years following their title win was hastened by a creaking defence; the Wes Morgan/Robert Huth axis wasn’t built to last.

Last summer, Harry Maguire arrived to begin that renovation and now, at far less cost, Evans has been signed to complete it. He’s extremely underrated. Maybe because he was never a guaranteed first-choice player at Manchester United, possibly because he’s been tainted by the decline at The Hawthorns, but there’s been a collective failure to recognise just what a good – and modern – defender he is. For £3.5m, this is a steal.

Brighton spent £15m to bring Bissouma to England – the third-highest fee paid in their history – but it should still prove cheap. The usual caveats apply: Bissouma has never played in England and he will begin his time here in a midfield which is expected to struggle through the campaign. However, Brighton have spent their summer upgrading very efficiently and he should be the most vivid symbol of that progress.

He’s really the perfect Premier League player: skilful enough to adjust smoothly to the speed of the game in this country, but also physical enough to cope with the inevitable physical battering. He takes a nice free-kick – YouTube regulars will know that – but his surges upfield are very eye-catching and should quickly become a feature of Brighton’s season.

A really exciting player who, at 21, is still nowhere near his potential best.

At £40m this was hardly a bargain, but that doesn’t make it any less smart. Chelsea have obviously signed a player who was fundamental to Maurizio Sarri’s work at Napoli, but also one who might revolutionise the way they play.

This ideological shift might take some time, so nobody should be surprised if Chelsea - and indeed, Jorginho - look a bit awkward for a few months. But he’s such a neat player, one who always seems available for a pass – and able to find one – that in time he can’t fail to alter the aesthetics at Stamford Bridge.

Admittedly that might depend on how patient Roman Abramovich is willing to be during this tricky beginning, and whether Chelsea are able to keep hold of N’Golo Kante and Eden Hazard, but the theory is sound enough.

Southampton struggled after losing Virgil van Dijk and, among many other issues, their defensive problems contributed to their slide down the table in 2017/18.

But they’ve addressed it. Vestergaard is an obelisk of a defender, more Trojan war hero than footballer, and he’ll be an enormous presence in both penalty boxes this season. Fantasy football players: Saints set-pieces will almost certainly lead to goals. Put it this way: he’s a strong defender and is the same height as Peter Crouch. In the mixer!

Middlesbrough were relegated in 2016/17, but that was really more to do with how offensively anaemic they were. For the most part, they defended pretty well - and Gibson was part of that.

Now he’s got a good move to Burnley. Back in the Premier League, of course, but also into a side which he’ll likely be perfect for. Sean Dyche’s side are built on organisation and centre-halves nearly always seemed to thrive under him – he turned James Tarkowski into an England player after all – and there’s no reason to believe that Gibson doesn’t now have an international future himself.

£15m is a lot of money for Burnley, but in a proper context, it’s a great deal for a 25-year-old British player who will only get better in a nurturing environment.