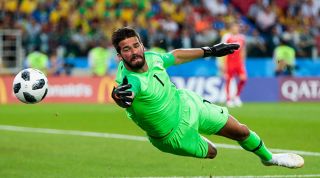 Brazil shot-stopper Alisson Becker had just signed with Roma in 2016 when he was invited to sit down with Danilo Gentili, a comedian who hosts the country’s most popular late-night talk show The Noite (The Night). Between laughs and jokes, Alisson told anecdotes about his career, but struggled to respond to one of the questions.

“You’re there to work, show that you’re such a great goalkeeper, and people just say you’re beautiful. Does it piss you off?” Gentili asked, smiling. “Are you angry at your beauty?”

It's a common topic in any interview with Alisson. In his homeland, he’s called ‘goleirogato’ (handsome goalkeeper). One of his former coaches at Internacional, Argel, used to call him ‘muso’ (the muse) in training sessions. He even won an informal beauty contest during the 2009 U17 World Cup – Neymar, Philippe Coutinho and Casemiro were also part of the team that played in Nigeria (and exited in the group stage).

Understandably, it’s a subject the 25-year-old has tried to avoid in the past – he’s even refused invitations to model. For a while, he was afraid it would get him too much off-field attention and harm his performances on the pitch.

Some in Brazil even questioned Dunga’s decision to pick him as Brazil's first-choice keeper in 2015, replacing Botafogo’s experienced Jefferson. “I didn’t get [to national team level] for being handsome,” he sighed in an interview with SporTV in May.

It’s safe to say Alisson doesn’t have anything to prove anymore. Still, when the summer transfer is concluded and he arrives at Liverpool for a goalkeeping world-record fee (around £67m), the 25-year-old will once again remind fans of just how he got here.

Sources close to the Brazil No.1 told FourFourTwo that he had already told Roma of his decision to leave over the last week. If the Liverpool offer hadn't been accepted, another one would have been.

The Reds met with Alisson’s representatives before Brazil’s friendly against Croatia at Anfield, at the beginning of June, and have reached an agreement with Roma this week. Permission was granted to discuss contract details with agent Jose Maria Neis, and terms were agreed on Wednesday. Chelsea were in the race but didn't match their rivals' proposal.

Alisson wanted to decide his new club before the World Cup and, at one point, seemed likely to join Real Madrid after speaking to the club’s director Juni Calafat – but the Spanish giants thought him overpriced.

“Let’s not joke around,” Negrisolo told newspaper Il Romanista after being asked about the €50m+ price tag. “He's worth much more. I don't think many people have realised who Alisson is. This guy is a phenomenon. He is the number one of No.1s.

“He is the Messi of goalkeepers, because he has the same mentality as Messi. He is a goalkeeper who can define an era.”

“The way he behaves in goal, he reminds me of Dino Zoff. I’d also compare him to Michel Preud’homme, who had the class of someone born to be a goalkeeper. I told Alisson when I met him at Roma’s Trigoria ground that he was born for this. He was already strong when he arrived, but has improved even more since he's been in Italy.”

No worries for Alisson, though: he’s used to it. In an interview around the same time, Brazil’s legendary shot-stopper and current goalkeeping coach Claudio Taffarel went even further.

He praised Manchester City’s Ederson but added: “Guardiola has such a great team, but [Ederson] met Alisson along the way – at the moment he’s the Pele of the goalkeepers,” Taffarel said in Il Giornale.

A World Cup winner in 1994, Taffarel (below) himself enjoyed a productive time in Europe during his career – playing for Galatasaray, Parma and Reggiana – and has been one of Alisson’s main enthusiasts since his rise. A gamble was taken on him after defeat to Chile in the first round of qualifiers for Russia, and Taffarel hasn't had any reason to regret it since.

Both of them are from Rio Grande do Sul State and have a relationship that goes far beyond the national team – it includes meetings in Rome for barbecue, and pep talks about Alisson’s career. The €8.5m purchase from Internacional soon looked like an absolute bargain.

But Taffarel isn't the only one who advises Alisson – he comes from a family of goalkeepers.

His brother Muriel, five years older, was Internacional’s starting goalkeeper in his first professional season and now guards the net of Portuguese side Belenenses. His father Jose Becker had the same role in his company’s team, while his mother Magali was a handball keeper. Even his great-grandfather played in goal.

Quiz! Can you name the 50 most valuable footballers in the world?

Not that his quality is entirely appreciated across his country. Brazilian outlet Globo Esporte recently created a poll asking fans who would be their first player on the team for the 2022 World Cup. Alisson finished eighth among the contenders, ending up behind Philippe Coutinho, Arthur, Lucas Paqueta, Marquinhos, Casemiro, Neymar – and his rival for the No.1 shirt, Ederson.

It’s a sign that, despite an incredible season with Roma and being highly rated by Brazil’s coaching team, he is still to conquer the love of his native fans. What else can he do? It’s difficult to say when many in the country hold the impression that he could have had a better World Cup. At least, being only 25, he can only get better over the next four years.

Luckily for Liverpool, it will be at Anfield – a place where his blue eyes won’t be the centre of attention or any influence on his evaluation.