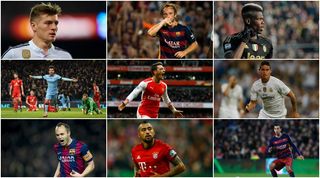 Here are the best 11 midfielders in the world, as decided by FFT and our trusty band of contributors from around the globe. Agree with our list? If not, tell us in the comments below or on Twitter or Facebook.

Passing, tackling, shooting: Vidal's got the lot. One of the most complete footballers in the world, the Chilean - who earned himself a Copa America winners' medal in July - was one of the key driving forces behind Juventus' domestic double and run to the Champions League final in 2014/15. Now operating in Bayern Munich's midfield, Vidal will almost certainly win his fifth consecutive league title in 2016.

Primarily used as a centre-back at Barcelona these days, Mascherano is still capable of stepping forward and bossing proceedings in the engine room. Full of energy and tenacity, the former Liverpool and West Ham United star anchors a midfield better than most, while his ability to pick out a pass is often overlooked.

Kroos has not been at his best under Rafael Benitez this term, but he's still one of the world's top midfielders when firing on all cylinders. While Real Madrid's front three of Cristiano Ronaldo, Karim Benzema and Gareth Bale is one of the best around on an individual level, the team's overall balance relies on players like Kroos.

Capable of playing in the front three or the middle three, Rodriguez is simply a superb all-round footballer. Skilful and inventive, the Colombia international can convert as well as create, although he will have been disappointed with his below-par showings at the Copa America in Chile.

The Premier League's not seen too many playmakers as good as Silva, who remains just as important to Manchester City today as when he first joined in 2010. The way he glides past opponents makes him a joy to watch, with his ability to control the flow of a game marking him out as a cut above most of the rest.

16 Premier League assists since August means Ozil is already three-quarters of the way towards breaking Thierry Henry's season-long record of 20. The German's always been gifted but he's become far more decisive this year; despite what some people might think, the jury is most definitely not still out.

If Real Madrid fans were concerned at Xabi Alonso's departure in 2014, they needn't have worried: Modric has become even better since his former team-mate swapped the Bernabeu for Bayern, orchestrating play from deep and knitting Madrid's midfield and attack together with poise and precision. One of the finest string-pullers around.

Get the ball and move it on. What Busquets does may sound easy, but the fact that no-one in the world does it as effectively as him suggests it's the Spaniard's talent that makes everything seem so simple. The 27-year-old is an intelligent reader of the game who does an important defensive job in front of the back four, but it's his range of passing and ability to break opposition lines that makes him so brilliant.

Those who adher to the argument that statistics don't tell the whole story should use Iniesta as exhibit A. A single assist and no goals in La Liga in 2014/15 would suggest a poor season, as would one assist and one goal this time around. In actual fact, Iniesta's been key all year, helping to build attacks from deep and control the tempo of games alongside Sergio Busquets.

With Carlos Tevez, Andrea Pirlo and Arturo Vidal all departing Turin in the close-season, Pogba has become the man Juventus turn to when they need a flash of inspiration. Capable of both creating and destroying, Pogba's taken his game to another level in 2015, in turn making himself Europe's hottest property. Barcelona, Real Madrid, Bayern Munich and the rest of the continent's big guns are expected to be fighting it out for his signature next summer.

Replacing Xavi in the Barcelona line-up is no easy task, so it's testament to Rakitic's quality that the Catalans claimed a treble with the midfield metronome limited to a back-up role. “I wanted to enjoy playing with Xavi: to enjoy spending time with him; to be with him on the pitch in all those great moments,” the Croatian told FFT earlier this year. Scoring in the Champions League final and posting a 91% pass success rate in 32 La Liga encounters was not a bad tribute to the outgoing icon.