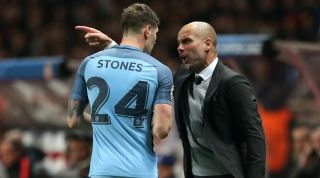 Mandanda's move to Palace after eight years with Marseille seemed to be a signal of intent from the Eagles last summer. The 32-year-old keeper was a Ligue 1 winner – and even more impressively had been named the best goalkeeper in the division on four occasions (including for 2015/16).

Yet the France international has made just nine appearances for the south London club. Admittedly, his season was disrupted by a knee operation – but even before that, he had conceded 11 goals in four straight defeats.

In February Mandanda said it would be a "great pleasure" to return to Marseille. It looks like he may get his wish this summer.

It's not Stones's fault that City paid £47.5m for him over the summer, but it certainly raised expectations. The merger of England's best ball-playing defender and the master tactician, Pep Guardiola, seemed like a match made in heaven. Right?

Well, not entirely. Stones has been directly at fault for three Premier League goals (the second most in the division) and played in all six of City's top-tier defeats. They've won seven of the 10 matches he's missed, drawing the other three. Stones finished the season on the bench, with Nicolas Otamendi and Vincent Kompany the preferred central defensive duo.

"Think Jonny Evans would have been a better buy than Mustafi," tweeted The Mirror's chief football writer and Gunners aficionado, John Cross, after the 3-1 defeat to West Brom in April.

He could well have been right. The £35m paid to Valencia for the Germany international last summer seemed increasingly ludicrous as the 25-year-old continued to serve as a symbol for why this Arsene Wenger team is falling short. The potential may be there (and he’s shown glimpses of what he can do), but the consistency isn’t.

With Martin Skrtel deemed past it last summer after eight years at Anfield, Reds fans could have been forgiven for thinking a younger model would be signed to fit Jurgen Klopp's high-intensity tactics.

Instead Klavan arrived, a centre-back just one year junior to Skrtel and effectively a budget version of the Slovakian at £4.2m. Liverpool have kept three clean sheets this season with the 31-year-old Estonian in the starting XI, while the four consecutive clean sheets they recorded in May were all achieved with Klaven on the bench.

Other than Jermain Defoe and Jordan Pickford, no Black Cats player has come out of this campaign with much credit.

Yet if any other player has the quality to have joined that (oh so short) shortlist, it was Khazri. The Tunisian who arrived from Bordeaux in January 2016 was key to Sunderland dragging themselves out of relegation last season, scoring in victories against Manchester United and Chelsea.

However, the winger has been virtually anonymous in 2016/17 until a late-season upsurge, with just one of his 21 league appearances coinciding with a win – a game in which he was a last-minute substitute against Watford.

Surely even Mike Ashley couldn't have hidden his surprise when Spurs agreed to pay relegated Newcastle £30m for Sissoko.

The midfielder was, however, coming off the back of an impressive Euro 2016 campaign with France – so while the transfer fee was steep, more was surely expected from the 27-year-old than clueless cameos from the bench. Or maybe it wasn't.

There's a player in there somewhere, but this one has looked short of too much.

Noble's inclusion may raise a few eyebrows, but the midfielder's stock has certainly dropped in the past 10 months after an excellent 2015/16 season.

So has West Ham's, of course, after finishing seventh last term – but it's never good when some Hammers fans are calling for their homegrown captain to be dropped. This is the man that a significant section were saying should be in England's Euro 2016 squad a year ago. That seems a long time ago now.

Much of Stoke's big spending over the past few seasons has gone largely unnoticed (more on that later), but it’s hard to ignore when their £18.3m record signing has been such a flop.

Signed from Porto in January 2016, Imbula was solid in the second half of 2015/16, but played just 12 league games in 2016/17 and managed only seven minutes after the turn of the year. The Frenchman is being heavily linked with an inevitable summer exit from the club.

On the subject of club record signings we come to Ibe, a player well regarded at Liverpool but one who didn't get much game time. Cherries manager Eddie Howe hoped he could change that, paying all of £15m for the now-21-year-old last July.

That hasn't done much to improve his output, though: Ibe failed to record a single goal or assist for Bournemouth in 25 league matches this season.

It seems unfair to include not one but two players from a side that finished second in the table, but not every player seen in a Tottenham shirt this season has been a positive.

With the White Hart Lane faithful craving Harry Kane cover, chairman Daniel Levy responded by splashing £17m on Dutch hitman Janssen. The former AZ Alkmaar has since scored two league goals in 25 games, one of which was a penalty.

Janssen works hard, but currently looks doomed to be the latest striker flop from the Eredivisie.

Fresh on the back of their incredible title win and readying themselves for a debut year in the Champions League, Leicester paid a club record £16m (later broken by the £28m signing of Islam Slimani) for Musa last summer.

The 24-year-old, who arrived with bags of European experience from his time with CSKA Moscow, was meant to help take the Foxes to the next level.

Instead, as the club stuttered domestically, Musa increasingly became a peripheral figure. Since the club's recovery under Craig Shakespeare, the Nigeria international has appeared in just three of their 12 league games – all from the bench.

There were a few candidates for this in what has been a general season of underachievement, but Hughes often goes under the radar.

The Welshman is about to conclude his fourth season as Stoke boss, having finished each of the previous three in ninth. This season it was 13th.

That record is adequate, but it’s the lack of progress that sees Hughes featured here. Over the past two years he's spent over £70m on transfers including Imbula and Saido Berahino, and also had the services of stars including Xherdan Shaqiri and Marko Arnautovic, but ultimately the Potters have still gone backwards.