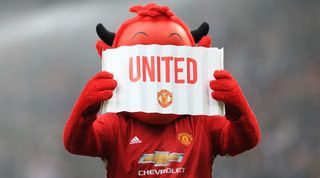 Club television channels are strange places. Fundamentally, they’re churches to the team in question; havens for supporters who want their football views unchallenged and their nostalgia undiluted.

Subscribers will tell you that they pay their fees for the reserve team football, the slanted alternative commentary and the occasional pre-season friendly, but - really - it’s the safe space that they crave. A place where everything is fine, none of the players are unhappy or up for sale, and in which every hope and dream is comfortably within reach.

On Tuesday, Manchester United’s vice-chairman Ed Woodward hosted a conference call with investors on the New York Stock Exchange and, while also trumpeting the “tremendous progress” made under Jose Mourinho and the latest financial projections, he also revealed the club’s intention to “aggressively market” their in-house media channel.

That should be soundtracked by ominous organ music. Woodward is, of course, motivated by his employer’s best interest, but the intention is fairly obvious: to use Manchester United’s television and social media channels to circumvent the traditional media.

It’s something which has been in the air for a while and a dynamic which several individual players have attempted to create via their own websites, but United have the existing fanbase and the resources to make it a reality. In a sporting sense, they are a commercial phenomenon and this will be their inevitable attempt to purify the coverage which surrounds them.

It’s logical, but it’s also troubling. A PR Week interview with the BBC’s sports editor Dan Roan (published on May 16) spoke of “the trust between the media and football clubs” having been “eroded”, with Roan feeling that journalists were now routinely being punished for trying to do their jobs and breaking stories.

He has a point. Several journalists - including a local paper in its entirety - have been banned from Newcastle United’s press box in recent years for daring to question some of the more opaque aspects of Mike Ashley’s ownership.

Lower down the pyramid, Port Vale, Rotherham, Nottingham Forest and Crawley Town have all imposed partial or total bans on local media in recent seasons and, in 2014, Swindon Town excluded the Swindon Advertiser from press conferences before, in 2015, extending the action to all media to protect the value of a content-sharing agreement with an android app. (This is the same Swindon that published a match report which failed to mention their relegation.)

The culture of distrust is highly visible, but so too is the intent to control the news cycle. Newcastle (again) agreed a preferred media partnership with Sky Sports and The Mirror at the beginning of the 2015/16 season. When questioned about the strategy, managing director Lee Charnley justified it as an attempt to “control and reinforce the positive messages the club wished to deliver”.

There’s a chilling phrase. Not just because it can be imagined echoing around downtown Pyongyang, but because some football executives believe they are entitled to that layer of trust.

While it’s not a universal problem, some British clubs seem increasingly intent on having their cake and eating it - on benefitting from the mass popular interest and visibility football affords, but not enduring the scrutiny and accountability which typically comes with that.

This is not a one-sided argument, nor an attempt to pretend that the media is always a force for good.

The tabloid coverage of Raheem Sterling in the aftermath of Euro 2016, for instance, was vile and there are many other examples in which players have been victimised in a way that both demands censure and justifies a restriction of access.

At a less important level, the digital era has caused a proliferation of soft content online. Much of it gives new life to gossip-column gibberish which serves no real purpose, and of which the in-house PR and communications teams are right to be suspicious. There is a clear difference, therefore, between journalism which serves the game and the sort that doesn’t.

However, the prospect of club-run outlets controlling the news cycle is still terrifying and should be vehemently opposed. In Manchester United’s case, their attempt is presumably animated by nothing other than the twin desires of fully monetising another aspect of their organisation and amplifying the reach of their existing partnerships.

There’s no suggestion of wrongdoing or subterfuge. But the danger is in the precedent and the creation of what may eventually become a new normal. The value of the role played by football journalists, as the connecting point between the club and the fan, won’t be truly appreciated until it disappears.

As the sport has become more commercially viable, the true intentions of owners and decision-makers have grown more questionable. The old cliche of the local businessman imparting his ambition and wealth on his boyhood club - the Jack Walker type - was always the exception rather than the rule and is now thoroughly out of date. The contemporary equivalent tends to view footballing success as only part of what can be achieved and, unfortunately, not always as a priority.

Venky’s have just taken Blackburn into League One, while Randy Lerner’s ghost haunts Aston Villa, marooned mid-table in the Championship despite a chequebook owner and proven manager in charge. Leeds, Coventry and Leyton Orient have all suffered terribly at the hands of owners who, to be polite, have never had the club’s best interests at heart.

Whether supporters choose to believe otherwise or not, sport consistently shows that it cannot be trusted to regulate itself and that it requires the media’s intrusion to remain honest.

Andrew Jennings’ long pursuit of FIFA’s Executive Committee is a famous example of that; so too is David Walsh’s commitment to unseating Lance Armstrong. More recently and locally, Daniel Taylor’s exposure of the horrendous abuse of young footballers, Barney Ronay’s energetic opposition to the Millwall CPO issue, and The Telegraph’s long investigation in agent malpractice (which also snagged Sam Allardyce in its net) are pertinent examples of why the media’s guard is so important.

Where the power lies:FourFourTwocounts down the most 100 influential people in football

Year Zero: the season that made Eric Cantona a legend

11 footballers who played through the pain barrier

In each of those instances, the reporting uncovered examples of football’s inability or unwillingness to resolve issues which it knew it had but preferred to keep from the public.

What a club chooses to do with its own media outlet is its own business. If Ed Woodward wants to aggressively market Manchester United’s native media channels, then he is entitled to do so. However, it’s imperative that influence doesn’t grow at the expense of more traditional outlets.

Clubs should not be able to deny access to journalists solely because of their unwillingness to toe a particular line, nor should bans be issued for reporting information which is in the public’s interest. In any other sphere of life, allowing that to happen would be seen as a clear challenge on freedom of speech, and a sporting realisation of the worst parts of Nineteen Eighty-Four.

This deserves more attention than it receives. Football, in spite of global magnetism, is not the exception to the rule. Especially now, especially given its wealth, it cannot be allowed to share only what it wants you to know.