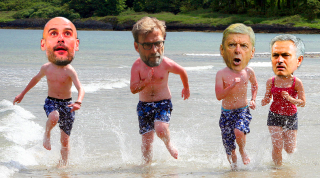 It’s as much a part of spring as daffodils and train strikes: Premier League teams get to the 40-point mark and collapse in an untidy heap of expensive limbs. The Big Four-Oh is such an important target for more than half the division that maintaining momentum thereafter seems almost impossible.

The standard claim from terrace to press-box to TV gantry is that “the players are already on the beach”. Understandably, this irritates paying customers and pacing managers: West Ham’s 4-0 home collapse to Liverpool prompted a waspish Arsene Wenger to note that “some teams are on holiday”.

That in turn provoked denials from gaffers as disparate as Pep Guardiola (“I never saw one player in my life go to the pitch and don’t try to win the game”) and David Moyes (“That’s an insult to football… the players have too much pride”) – but it happens all the time that teams reach 40 points and have a nice sit down. Doesn’t it?

Being FourFourTwo, we decided to examine the evidence. The methodology is simple: measure teams’ average points per game (ppg) until they reach 40pts, then measure it afterwards. And because we’re fair-minded yet inquisitive, we did it for every Premier League team this season, including the glory-chasers up the sexy end. (Note: There's a shiny chart at the end for your pleasure.)

The results are in (decline)

The results confirm the thinking: of the 16 teams to reach 40pts before the final game, 12 slowed down thereafter. And far from being unique to the drop-dodgers, this includes all the Big Teams bar one: Tottenham, who were only the fifth side to pass 40pts, upped the pace from 2.10ppg to 2.44ppg in an entertaining but ultimately doomed pursuit of Chelsea.

Antonio Conte’s side can be forgiven: they reached 40pts in just 16 games, a frightening 2.50ppg rate only ever maintained once over a 38-game Premier League season – by Jose Mourinho’s first Chelsea side, who racked up 95pts in 2004/05. Having passed 40, this season’s Blues slowed very slightly to 2.41ppg – enough for a still-unusual 91.5pts over the season and, obviously, enough to keep them ahead of Spurs. Cue Pochettino waving an angry fist at an uncaring blue sky.

It’s notable that the other clubs aiming their sights and budgets firmly at the top four also fell off toward the end of the season, despite the desperate chop-and-change of the Champions League chase resembling a game of musical chairs in which the loser forfeits tens of millions.

Liverpool’s 2.22ppg fell to 1.80 amid injury and inconsistency, Arsenal’s 2.11ppg dropped to 1.84 among uncertainty and acrimony. Man City’s 2.10ppg slowed to 2.00, although the former number was supercharged by their six successive wins at the start of the season; since that run ended in early October they’ve averaged 1.88ppg, which over a 38-game campaign would yield 71pts – only just ahead of their neighbours.

Speaking of which, after that, we’re into the teams who didn’t top 2ppg either before or after 40pts. Manchester United (1.91 then 1.71) were hampered by winning fewer home games than West Brom, Everton (1.74 then 1.4) by an away record worse than Crystal Palace’s – but they were still streets clear of The Rest.

They also ran (but a lot slower)

Outside the top seven, managers mean it when they trot out that hairy old saw about “the first target being 40 points”. More and more, mere survival means success: another season in the top flight, another fat TV-rights cheque for the agents to squabble over.

Trouble is, once they’ve turned 40, teams are content in the mid-table morass, mindful or wary of chasing a place in the demanding Europa League. In the end, Southampton won the tallest-dwarf competition with 46 points - the lowest total for an eighth-placed team since the 1981 introduction of three points for a win.

Which brings us to West Bromwich Albion. Give or take the odd day, they sat s(t)olidly in eighth from Christmas until the final week of the season. Throughout January and February, as Tony Pulis drove them on towards 40 points, they became increasingly marooned alone betwixt the top seven and an ever-revolving cast of teams just below them who were too far above the relegation zone to panic.

Sure enough, the Baggies reached 40pts on February 25, having averaged 1.54ppg from their first 26 games. From their next 11, they gained just five points – 0.42ppg, which over a season would gather a mere 16pts. That makes West Brom the worst serial offenders for “being on the beach”, but they’re far from the only ones.

Hitting 40pts (by gaining points against West Brom, the same way Leicester and Burnley reached safety) after 30 games, Southampton promptly relaxed from 1.33ppg to 0.75 (which would be 28.5pts over the season).

But that’s a mere stumble compared to Watford. Breasting the 40-point tape after 32 games on 1.25ppg, they immediately collapsed and hibernated: in their final six games they collected zero points and conceded 16 goals. Even when they scored three against Chelsea Reserves, they still contrived to concede four. Exit Walter Mazzarri.

Watford aren’t the only team to declare at 40; Burnley lost their two games since, Palace lost to Mourinho's youth team. So did anyone get better once they relaxed?

Leicester looked like bucking the trend: tracking at 1.176ppg by passing 40 after 34 games, a win against Watford In Flip-Flops boosted their post-40 average until a narrow defeat at Man City and a wide one against Spurs took them down to 1ppg. That said, the pivot point in their season was not reaching The Magic 40-Point Mark but sacking Claudio Ranieri after 25 games in which his side collected 21 points (0.84ppg); by contrast, Craig Shakespeare has collected 23 points in his 13 games – a top-six pace of 1.77ppg which, over a season, would gain a team just shy of 67 points. So that’s your aim for next year, Craig.

Having topped 40 by beating Spurs, West Ham snoozed to that defeat against Liverpool which so irked Wenger - which may well be its own reward. Then their win against a dozily safe Burnley helped them to 1.5ppg in their extremely-small-sample-size two post-40 games. Stoke reached 40 with three spare games, conceded six but enjoying a closing win at a slumping Southampton who didn't score in their last seven hours at home.

And then there’s Bournemouth. Their 35th-game win at Sunderland took them to 41 (at 1.17ppg), since when they’ve averaged 1.67ppg by drawing with Stoke and beating Burnley, two teams who had each reached 40 in their previous games, before a last-day draw at Leciester.

That means Eddie Howe’s side did far better in safety than they did last year. In their maiden top-flight campaign the Cherries passed 40pts with five games to go but collected just one more point. That sole draw was against West Brom – which brings us back to Tony Pulis.

With nine successive seasons of comfortable Premier League finishes, it can’t be denied that Pulis gets results. Thing is, most of them are losses, once he’s collected 40 points. This season’s protracted swallow-dive is merely more noticeable because West Brom hit 40 much earlier than any of his teams previously.

This year’s Baggies reached the mark at 1.54ppg. That was a personal best for Pulis, ahead of his partial seasons at The Hawthorns (1.47) and Palace (1.50), but his pre-40pt results are generally solid, never dipping below a 1.14 campaign average. Indeed, his overall return in those 263 games is 342 points – an average of 1.3, or a very safe 49.4pts if extrapolated over the season.

But there’s the “if”: they aren’t extrapolated over the season. Over the nine campaigns, his team’s post-40 results resemble a toddler’s halting attempts to draw centipedes: WL / DLLWDL / DWLL / DLDDLD / WLL / WLDD / DWL / LLLDLDD / LLWDLLLLDLLL. That’s just 36 points from 46 games – 0.78ppg, or sub-30pts per season. Pulis has a cap, and it’s 40 points… but as the results show, he’s far from alone in that.