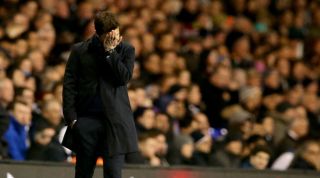 Tottenham’s implosion in May shouldn't detract from their overall campaign: they showed enough positive signs to indicate that their performance over the campaign wouldn’t be a one-off.

Mauricio Pochettino's team were rightfully title challengers and although they fell short as other top clubs underperformed, they can still expect to be close to the summit at the end of 2016/17.

The Argentine is fully aware that it will be difficult to replicate the standards of last term, however, what with the arrival of several top managers to the Premier League and a substantial increase in the league’s television deal. Meanwhile, this summer's European Championship has unexpectedly thrown a few dilemmas at the coach to deal with...

It was a tournament to forget for Kane. The striker failed to score, looked tired and jaded throughout, while criticism bestowed him and Roy Hodgson about his deliveries from free-kicks and corners.

Kane has had two exceptional seasons, but he has made over 100 appearances in the last two years for his club. He has scored 59 goals in all competitions for Spurs, but he's clearly showing signs of fatigue. The attacker turns 23 at the end of July and the high-tempo application of his team's playing style will naturally mean he can't always be at his peak unless given adequate rest.

He scored just once in his final four games of the season for Spurs, after netting seven in the five before. Spurs’ recruitment team appeared to have identified some help with the long pursuit of Saido Berahino and recent interest in Michy Batshuayi, but the former’s attitude problems and latter’s imminent move to Chelsea means they’re now unlikely. Both players are similar stylistically, as they prefer to use their pace off the last defender and aren't particularly adept at holding the ball up for others.

Pochettino's demands from his side in matches and training ensures that they are among the fittest group of players in Europe. However, his mentor Marcelo Bielsa will testify that they are only human and can suffer from burnout.

Bielsa's teams infamously produce high-octane football for an 18-month period, but tend to fall away when the players get fed up with his vigorous beliefs. The Spurs coach won't want his team to hit the same barriers, so he will need to rotate more to ensure they don't follow the same path.

The former Newell's Old Boys centre-back regularly changed full-backs last term due to the energy required in the role, although his adjustments were less frequent throughout the rest of the team, with Kane playing every league game and Eric Dier starting all but one. It shouldn't come as a surprise that it's their defenders that have had the more positive impact in France, with Toby Alderweireld and Ben Davies enjoying a decent competition.

Of course, Tottenham need other options to implement this ideas and ease the burden, especially in the forward areas. Their Europa League campaign has prepared them for numerous games, but the Champions League will test their resources even further. The intensity of every match, financial rewards and expectation levels are what sets it apart from its poorer relation.

Euro 2016 has shown that defensive resilience combined with some counter-attacking can profit, with Iceland and Northern Ireland both recording lower than 37% possession. It's a smaller sample size, but Italy have the same ball-retention statistics as relegated Aston Villa and Newcastle had in 2015/16.

More teams in the bottom half of the Premier League may be willing to forsake intricate build-up play against Tottenham, as they instead focus on denying them space to run into. Pochettino's men are better when playing in a direct fashion and like England, they may suffer when teams put 10 men behind the ball.

As with Leicester, few sides tried to simply nullify Spurs’ threat through a deep defensive line. Tottenham scored seven goals at White Hart Lane against Manchester United and City, but the better teams should all improve defensively with Jose Mourinho, Pep Guardiola and Antonio Conte all coming into the league.

Kane's aerial strength and the team's set-piece organisation is the most prominent way to combat this predicament, although opponents should be a little warier of this threat having seen them score 17 goals from dead-ball situations last term.

Hodgson's successor must not let his good work go to waste

4. Alli should play in an advanced role

Hodgson used Dele Alli as part of a three-man midfield, and he doesn't look as comfortable or as influential in the position. The former MK Dons midfielder has an excellent relationship with Kane, but the two weren't able to link up frequently in the attacking third as the striker often had to drop deep.

Alli assisted Kane for seven goals last season, but England weren’t really able to take advantage of their special understanding because of his deployment and defensive duties. The 20-year-old had a better pass-completion rate for his country, but this was caused by a need to link the team together rather than create opportunities near the opposition area.

It's notable that he averaged 20 passes fewer then team-mate and captain Wayne Rooney, despite the fact they occupied similar positions. Last season he scored just one goal and made one assist in 10 league games in a more withdrawn role, whereas he scored eight and assisted 10 in 27 matches either as a No.10 or on the left wing.

Alli has a particular talent for arriving in the box late to score goals, while his defensive strengths are best utilised in closing opponents down rather than chasing them back towards his own goalkeeper.