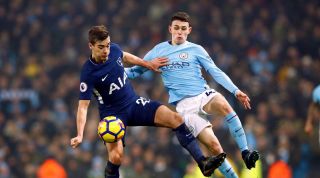 Manchester City may find themselves way off the pace in the Premier League but there’s still plenty to play for this season. There’s the dual defence of domestic cup titles, not to mention the holy grail of the Champions League. And if anyone’s going to catch Liverpool, surely it has to be Pep Guardiola?

City are no strangers to flashing the cash and this winter, it seems like they may have to again. With aging stars, injury crises and the allure of some of Europe’s finest, here are five transfers that Manchester City could make during this window.

One of the most well-respected defenders outside the top six, Nathan Ake makes a lot of sense at Manchester City. He’s young enough to grow at the club, versatile enough to fill in at left-back or defensive midfield, and he’s an intelligent, physical and technically-gifted player.

There are a number of obstacles to his transfer, however. Chelsea reportedly have first refusal on the Dutchman and they may wish to exercise that clause of his contract. Bournemouth won’t want to lose one of their biggest assets before a relegation fight and the defender’s recent injury puts him out of action until midway through the month. A move to City may be unlikely, but not off the cards.

At 19-years-old, Sandro Tonali has been compared to both Andrea Pirlo for his passing range and Gennaro Gattuso for his defensive capabilities. Already linked with Europe’s elite, it’s only a matter of time before the Italian midfielder makes the move.

The Etihad may provide the perfect next step in Tonali’s education. Fernandinho is 34 now and after missing out on Frenkie de Jong last January to Barcelona, City might be open to securing another option in midfield for the future. Rodri has been solid for Guardiola’s side this season - in midfield and defence - but the opportunity to secure the next generation may prove an enticing one for City.

Failing to replace Vincent Kompany last summer has proven to be a mistake for Man City. The Citizens found themselves with three recognisable senior centre-backs in Otamendi, Stones and Laporte, which was then reduced to two, following the long-term injury of the latter.

Milan Skriniar has long been linked with the North West. The Inter defender is one of the most complete defenders in world football and at 24, his best years are still ahead of him. Skriniar doesn’t just add a degree of quality to the backline though, he adds a composure that Laporte sorely lacked against Tottenham in the Champions League last season. This could be an expensive signing, but one that takes City closer to a European title in seasons to come.

Lautaro Martinez has been one of the major success stories of Antonio Conte’s Inter Milan revival. The Argentine striker has impressed alongside Romelu Lukaku and with exactly the kind of off-ball energy and eye for goal that Guardiola demands from his attackers.

Sergio Aguero isn’t getting any younger and has had spells on the sidelines this season. Likewise, Leroy Sané’s long-term injury has only delayed what is reportedly still strong interest from Bayern Munich. Inter won’t want to lose the star during a title run-in, but City’s pull could be magnetic for Martinez, who is perhaps a decent option for City either through the middle or in Sterling’s “wide poacher” role.

Which players could Arsenal be targeting this January?

Since his appointment at Tottenham in October, there’s been a lot of talk of who at White Hart Lane aren’t typical “Jose Mourinho players”. Despite injuries in midfield to the likes of Moussa Sissoko and Tanguy Ndombele though, Harry Winks could be one of the first sacrifices of the Mourinho era in North London.

Winks is a calm controller with masterclasses at the Bernabeu and Nou Camp under his belt. Another option in a midfield that’s already losing David Silva in the summer, Guardiola would no doubt relish the opportunity to mould the 23-year-old, should Spurs chief Daniel Levy accept a reasonable price. The homegrown aspect is certainly a bonus, too.

QUIZ Can you name the 25 biggest transfers involving English clubs?