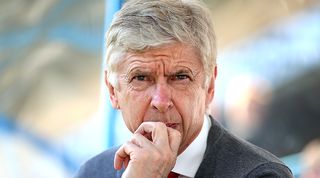 Forgive us, Spurs fans – but your boss is the No.1 target for Real Madrid. The drum began beating some time ago for Pochettino to replace Zidane, and those two outstanding results in the Champions League last season only strengthened the Argentine’s case (not to mention his anti-Barça persuasions).

His work at Tottenham has been outstanding; well-measured and calculated, helping to keep the north Londoners punching above their weight. Working on a limited budget, the 46-year-old has turned Spurs into genuine title contenders since his arrival from Southampton in 2013.

While there are still no trophies to show for it, the Argentine’s work is defined in other ways. First and foremost he has progressed the club’s young players tremendously well, shaping rough-edged talents into superstars. Harry Kane and Dele All are household names these days, and it’s largely due to their manager’s impressive guidance. The ex-Espanyol chief has built an aggressive, hard-working team which plays expansive and attractive football, but also maintains defensive stability.

But resources are limited at Spurs, and Pochettino may crave more. It’s also intriguing to think what he could do with more at his disposal – perhaps then he could finally land some silverware.

A new five-year contract still has the ink drying on it, but that doesn’t mean Spurs fans will rest any easier: if Real Madrid want something, they often get it. Pochettino is a worthy frontrunner and wouldn’t be human if he wasn’t slightly tempted by the Bernabeu.

Only this week Wenger, revealed his past dalliances with Real Madrid, albeit very cautiously.

"Real Madrid, I think I turned them down two or three times,” said the Frenchman. “They are one of the teams I loved as a kid but I felt it was a very sensitive period for Arsenal.”

Now such problems don’t exist for Wenger anymore, and despite 22 years in the job with his beloved Gunners, there appears to be nothing stopping him from carrying on in management. Real Madrid would be some way to return, and the 68-year-old certainly ticks plenty of boxes.

His experience at the very top is his main asset, and something the others in the running simply don’t boast. Wenger has been there and seen it all, worked with some big players and also turned plenty of them into stars along the way. The Frenchman is calm and collected enough to deal with the club’s internal politics – namely, taming head honcho Florentino Perez – and also charm the circus-like Madrid media.

Wenger may have one last job left in him – and what a way to go out this could be.

Like Zidane himself, Guti is a former Real Madrid player with cult status. He’s also ‘of the house’ as such, and has been cutting his teeth in losBlancos’ youth sides out of the spotlight.

After working as an assistant for several years, he branched out on his own with the U19s. His work has been mightily impressive, too – they won a historic double in 2016/17, and reached the UEFA Youth League quarter-finals last season.

Known for his appreciation of intense, attacking football, Guti has been earning plaudits behind the scenes at Real Madrid, with many talking up his chances as a future first-team coach. His lack of experience could go against him, however, as Madrid are under great pressure to keep on winning. They might feel Guti is too much of a risk and needs to show more at a higher level.

Still, it didn’t work out too bad the last time they took on a rookie coach...

While his stock at Chelsea has dramatically decreased, Conte remains a possibility for Real Madrid thanks to the success he’s already enjoyed as a coach by the relatively young age of 48. He’s already won three Serie A titles, the Premier League and an FA Cup, and also impressed with his work as Italy boss which culminated in a Euro 2016 quarter-final finish.

Wherever Conte goes, he achieves – and that’s why Real Madrid will consider him despite a poor year at Chelsea. That aggressive, organised style might well be the shot in the arm Madrid need to make up for a dismal season in La Liga.

Conte is a demanding coach, but when he gets it right, his players respect him immensely. His achievements as a player and ability to identify with success would hold him in good standing with the Real Madrid dressing room.

FEATURE How do you follow greatness? The glorious successes – and crushing failures – of 15 men who came next

QUIZ Can you name the top World Cup goalscorers for these 30 major countries?

Germany’s manager has long been linked to the Real Madrid job. With a World Cup win to his name, the 58-year-old clearly has the track record to to step into such a trophy-obsessed club.

Low has been an important part of the national team set-up for 12 years now, and therefore been present from the start to help transform his country into a truly elite footballing nation. Spain were finally knocked off their perch in 2014; host nation Brazil infamously vanquished 7-1 along the way.

A recent contract renewal and impending World Cup makes this one unlikely at the moment, but post-Russia, Low may feel his work is done with Germany and return to club management for an opportunity like this.

His lack of status at club level could go against him, however, with only an impressive spell at Stuttgart to his name. Is that enough for Florentino & Co. at Real Madrid?