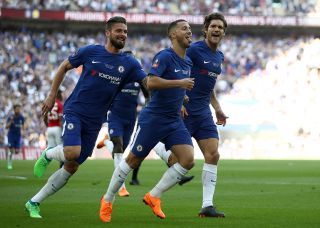 Manchester United versus Chelsea could only mean one thing: the latest instalment of Eden Hazard versus Ander Herrera.

When the teams met in last season’s FA Cup, Herrera was sent off for two fouls on Hazard and Chelsea won 1-0. When the sides met in the Premier League at Old Trafford a month later, Herrera man marked Hazard and it proved a masterstroke: Antonio Conte’s men were on the way to the league title by then, but Hazard was marked out of the game and Manchester United won 2-0.

Jose Mourinho asked Herrera to man mark Hazard once more in this cup final at Wembley – possibly a more controversial decision, given that Chelsea were in nothing like the same form going into this game. Was it surrendering too much initiative, just like United did when they played defensively in their Champions League last 16 first leg at Sevilla?

Herrera spent much of the early stages shadowing the Belgian, letting Hazard get no more than a yard or two away. But there was a warning when Phil Jones lost possession on the halfway line: Herrera had left Hazard to make himself available for a pass, Chelsea won the ball and Hazard was quickly one on one with Jones. On that occasion, David De Gea made a save.

A few minutes later, the goalkeeper wouldn’t be able to rescue them. Again Chelsea won the ball quickly and found Hazard before Herrera could get in position. This time the Belgian beat Jones for pace and won the penalty from which he scored the opening goal. Mourinho’s gameplan was in ruins.

There’s been much speculation about Antonio Conte’s future in recent times, with suggestions that the Blues might make a change after a disappointing fifth-placed finish in the Premier League this season. He wouldn’t be drawn on his future before this cup final. “This will be my last match… this season,” he said with a wry smile at the pre-match press conference.

Conte versus Mourinho has been a grudge match in the past, even if it’s calmed down a little in recent months, and the Italian won this tactical battle. Chelsea packed the midfield with Cesc Fabregas, N’Golo Kante and Tiemoue Bakayoko, with Manchester United struggling to find a way through for long periods.

If it does turn out to be Conte’s last match as Chelsea boss, he certainly left on a high note, lifting the FA Cup. But then people thought Arsenal’s victory over Chelsea in last year’s final might be Arsene Wenger bowing out on a high, only for the Frenchman to stay for another season. The next few days could be interesting at Stamford Bridge.

Jose Mourinho made a late decision on Romelu Lukaku’s fitness ahead of this final – in the end, an ankle injury meant the striker was only able to take a place on the bench.

Lukaku was introduced after 72 minutes, but United badly missed their top scorer before that: Marcus Rashford and Alexis Sanchez started in a two-pronged attack, with Jesse Lingard playing just behind them. Their goal threat was minimal for large spells.

Lukaku offers a physical presence that Rashford cannot, and the 20-year-old struggled to make an impact in the first half. As the game opened up in the second period, Rashford did twice come close, only to be denied by Thibaut Courtois. One wonders if the game might have gone differently had Lukaku been fit enough to start.

It’s a long time since neither Manchester United nor Chelsea had a guaranteed starter for England going into a World Cup. That’s the case this time around though: United quartet Jesse Lingard, Marcus Rashford, Ashley Young and Phil Jones all have work to do to secure a place in Gareth Southgate’s line-up, as does Chelsea’s Gary Cahill.

Centre back rivals Jones and Cahill were going head to head at Wembley. It’s still possible that neither will start England’s World Cup opener against Tunisia, with Kyle Walker, John Stones, Harry Maguire and Eric Dier also options for Southgate’s three-man defence. But Cahill was more impressive than Jones in this cup final.

Jones was caught out by Eden Hazard for Chelsea’s opener - taking up the wrong position to let Hazard surge inside him, then getting his attempted recovery tackle badly wrong to concede a penalty. In contrast - aided by Antonio Rudiger alongside him - Cahill largely kept United at bay, particularly in the first half. Has the Chelsea man staked a claim for a start in Russia?

Tiemoue Bakayoko’s first season at Chelsea has not gone to plan: since the French midfielder arrived for £40m last summer, the Blues have endured a difficult campaign in the Premier League and the 23-year-old has struggled to replicate the form he showed for Monaco in 2016/17.

But Bakayoko actually played pretty well in this cup final – covering ground, helping Chelsea to remain solid in midfield and notably getting forward in the opening minutes, when he had an appeal for a penalty turned down.

Can this now be a turning point for the midfielder? Can he take the confidence of this performance into the summer, and return reinvigorated for 2018/19? He wouldn’t be the first player to flourish after a difficult first campaign in England.