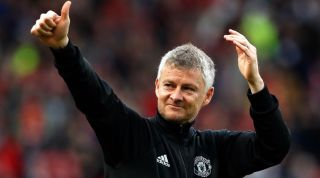 Manchester United fans have largely spent the last six years in a state of utter delusion. It didn’t matter how bad things became: every summer there was a sense of optimism about what the new season might bring.

Given that the club had been achieving what felt impossible for a few decades before, it’s no surprise that it has taken supporters a while to allow their new reality to set in.

They were told you’d never win anything with kids, only for Fergie's Fledglings to claim the Double in 1995/96. They scored two goals in injury time to win the Champions League in 1998/99. They won the league for three years on the trot from 2007-09, having been warned that Roman Abramovich’s wealth would see Chelsea dominate indefinitely. And just look at the state of the squad that won the top flight so convincingly in 2013. United had always managed to do what you couldn’t imagine to be feasible.

So after David Moyes took the club from champions to seventh in a matter of months, Louis van Gaal played the dullest football supporters had seen for years and Jose Mourinho gave up before a season had even started, there was always a large portion of fans who remained excited about what the future held.

Now the overwhelming feeling is that the glory days are well and truly over; that Manchester United need a miracle to restore the club to its former glories.

So, what do I want to happen this summer to rectify the problems?

1. The Glazers to go

While I’m not at the stage where I’ll profess that any owners are better than the current ones, the Glazers have got to go.

Their unwillingness to invest as rival clubs did was largely covered up by the genius of Alex Ferguson. It didn’t matter that United were being outspent by Chelsea, then Manchester City, as the legendary manager was still able to create a top team and guide them to the title more often than not.

Without arguably the greatest manager in history, whose reputation improves with every passing season, the Glazers' failures are all too apparent. The wheels started to fall off when the best player in the world was sold for £80 million and in his place came Antonio Valencia, Michael Owen and Gabriel Obertan for a total of £19 million. It’s only got worse since then.

2. Woodward to be replaced

Ed Woodward excels at what he knows. United have taken off commercially and he deserves credit for drawing in the sponsors that he has done, especially with United performing so badly on the pitch.

But as Van Gaal recently put it, he has “zero understanding of football”. SAnd why would he? He’s a banker who the Glazers employed to take charge of the club’s financial planning.

After six years of failure in the transfer window, with United unable to bring in even one outstanding player in that time, it’s remarkable that Woodward hasn’t been returned to a role that revolves around commercial activity.

The Glazers want to make money, so it’s unfathomable that they haven’t realised they could generate yet more cash if the club was winning league titles or Champions Leagues – something that will never happen with Woodward calling the shots on transfers.

While Manchester United haven’t been able to match City for spending over the past six years – or a host of other clubs more recently, for that matter – they still have spent an awful lot of money since Ferguson’s retirement. They’ve just spent it really, really badly.

When you compare that with rival teams that have hoovered up much more talented players than United for a fraction of the price, it becomes all the more alarming how badly the club have performed in the transfer market.

Sadio Mané, N’Golo Kanté, Mo Salah, Bernardo Silva, Roberto Firmino, Gabriel Jesus and Son Heung-min are among a group of players who have signed for rivals on the cheap, by today’s standards, while United have splashed out a fortune on the likes of Fred and Romelu Lukaku.

4. Move the deadwood on

It’s laughable that the likes of Ashley Young, Phil Jones and Chris Smalling all signed contract extensions last season, given that none of them have ever looked like being the quality you'd expect from a side that is supposed to be challenging for the title. They’ve made close to 800 appearances for United between them, and Smalling is entitled to a testimonial next summer.

Remember when Ferguson moved on Mark Hughes, Paul Ince and Andrei Kanchelskis all in one summer, knowing that the club could do better? United now desperately cling on to players who have never been consistently good enough because it’s cheaper to extend a contract than sign a world-class replacement. And it shows.

United supporters may feel as though they've already been forced to be patient enough watching the gap between them and other clubs grow, but they could put up with it if they sensed there was a proper long-term plan in place. It takes time to build a team, develop an identity, adopt a winning mentality and forge understanding between players that results in quality football.

The past six years have instead been littered with decisions that take place on a whim, with no forward planning or real idea about where the club is heading. Someone who knows what they’re doing needs to take the reins and start putting things in place which will allow United to rediscover all of the attributes that make a successful club. Fans took that for granted and believed it was easy because Ferguson, his coaching staff and David Gill made it look that way. But it isn’t, and the success United enjoyed for two decades doesn’t happen by accident.

Whoever owns the club – Glazers or otherwise – needs to have the wherewithal to appoint the right people to the right positions. Until that happens, nothing will change at Old Trafford.