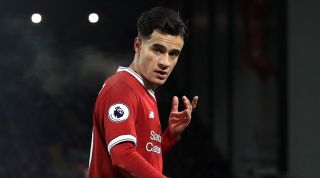 Jurgen Klopp has expertly managed the Reds’ squad in recent weeks, resulting in three consecutive post-Christmas wins in the Premier League. Liverpool have a squad brimming with players who are fit and in form, just a year on from where it all went wrong for Klopp’s side.

However, January offers a time for managers to enforce their squad ahead of the second half of the season and – even after the much-needed addition of a new centre-back – there’s plenty of ways Klopp can bolster his squad this winter...

It’s hard to keep up with exactly what’s being claimed about Coutinho’s future, with some suggestions that Barcelona will return with a mega-money bid this month and others claiming the Spanish side will wait until the summer.

What's clear is that Barcelona continue their public courting of the Brazilian, with Andres Iniesta this saying this winter: “He’s a player with qualities like ours and it would be a great signing if it’s finally done.”

Coutinho has been in superb form - once his back injury was miraculously cured after the transfer window closed and following a long-haul flight to Brazil - and while it’s inevitable he’ll be gone by next season, keeping him for the remainder of this one is vital.

Losing Coutinho in January would be a huge blow to Liverpool’s season – he’s a difference-maker in what is a huge battle for the top-four places.

There have been suggestions that Liverpool’s interest in France international Thomas Lemar is linked to Coutinho’s departure. Even if the Reds keep Coutinho through January, they should be still looking to sign him this month; it would allow him a gradual settling-in period where he isn’t required to be the main man from the off, and he can become a key player from next summer.

When Liverpool lost Luis Suarez to Barcelona – a move that, like Coutinho’s, was inevitable – their biggest mistake was not planning ahead for his departure. Infamously, the Reds ended up with Mario Balotelli and Rickie Lambert instead of Alexis Sanchez.

If Lemar is off the table, another player to replace some of Coutinho’s qualities must be identified ahead of a summer move. With Naby Keita’s arrival boxed off, Liverpool need to also be determining who will be the best midfield partner for the Guinean – whether that’s somebody in the current squad or a new signing required for a midfield overhaul. Emre Can's future is still unclear too.

The 21-year-old winger enjoyed a good pre-season last summer, impressing against Bayern Munich among others. A loan to Bundesliga side Freiburg looked to be a good move, giving him the platform to test himself in one of Europe’s top leagues, and a significant step up from loan spells in the Championship.

However, it’s not worked out that well so far, and Kent has featured in just six games for the German outfit. He’s returned to Merseyside for the winter break and Liverpool are said to be mulling over whether to recall him early.

Although playing time in the Reds’ first team is unlikely to be forthcoming, especially with the FA Cup third round pitting them against Everton rather than a lower-league side, there’s little point in Kent remaining in Germany. Perhaps he’d get an opportunity in the FA Cup fourth round should the Reds best their Merseyside rivals.

4. Loan out some talented youngsters

Liverpool’s early exit from the League Cup against Leicester was a big blow to some of the club’s talented youngsters who needed the competition to get first-team action.

The likes of goalkeeper Danny Ward, prodigious teenager Ben Woodburn and midfielder Marko Grujic are therefore left with little opportunity - with Ward only featuring once for the club’s under-23s since. There’s also Welsh winger Harry Wilson - the Premier League 2’s Mo Salah with 12 goals and 10 assists in 16 appearances - who is far too good to be playing reserve football.

Wilson is reportedly wanted by Championship side Preston and a move to the Lancashire side would suit all parties. Woodburn and Ward are wanted by their former Wales boss Chris Coleman at Sunderland, while Grujic seemingly has a host of suitors from the Premier League and Championship.

Getting these talented youngsters playing time would massively aid their development, thus improving the Liverpool squad for the future.

The Reds are set to lose Emre Can on a free transfer, but there’s plenty of players out there who are similarly available at the end of the season.

Quiz! Can you name the 50 highest winter transfers by Premier League clubs?

Liverpool did well when securing Joel Matip early when his contract expired at Schalke, and such proactive business should be explored this January. Lazio centre-back Stefan de Vrij’s current contract expires at the end of the season and the Dutchman would be a welcome addition at Anfield.

Ideally, Liverpool need to add another centre-back as well as Van Dijk before next season, so De Vrij would be smart business.

Leon Goretzka is another name linked with Liverpool who can agree a deal with foreign clubs from January, and the German midfielder would be another excellent signing.