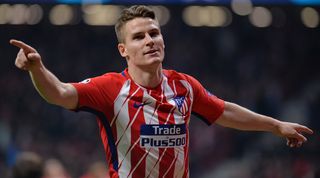 It’s that time again: the January transfer window is open, and as Premier League clubs cast out their nets, they usually find some of the best catches in La Liga. These players from Spain’s top flight could well be on the move this month...

It’s now common knowledge that N’Zonzi’s time at Sevilla is up, and a move back to the Premier League is his top priority. A fall-out with former coach Eduardo Berizzo (who was let go in December) meant an already-unsettled N’Zonzi grew even more isolated at the club, but he’s confident of an exit given the large amount of suitors.

N’Zonzi’s progress has been steady since arriving in England at Blackburn under Sam Allardyce. He was an underrated figure at his next club Stoke, but has developed into one of Europe’s best in his position since moving to Sevilla. The 29-year-old midfielder has experienced Europa League success twice with the Spanish outfit and feels he can now command a move to a major side.

A methodical, intelligent performer, N’Zonzi can control games from deep in front of his own defence and burst forward to support the attack. His passing range is strong and he’s an imposing figure in terms of physical characteristics. There’s no doubt his signing would give almost any club an immediate injection of quality.

One of the revelations of the current campaign, Rodri stepped into Villarreal's midfield to replace the injured Bruno Soriano with ease. The 21-year-old has approached the situation with comfort and above all maturity, which is especially impressive for someone who’s still so young.

Rodri is a talented central midfielder, capable of knitting a team together and making sure there’s a solid base. He can play both short and long passes effectively, bringing others into play, and also joins in attacking moves when he roams forward. Comparisons have been made with Sergio Busquets by some in Spain, and there are certainly similarities between the two.

A recent contract renewal didn’t do much to silence the rumours around Rodri’s long-term future, and a release clause – reportedly €20m – would be a small price to pay for the Spanish midfield superstar.

One of the outcasts at Atletico Madrid who looks likely to be available in January, French striker Gameiro could prove to be a canny piece of business for a side in need of goals. He simply hasn’t settled in Madrid, and is a player who has fallen foul of Diego Simeone’s specific methods.

Yet Gameiro was lethal during his time at Sevilla and disappointment with Atleti doesn’t mean that he’s had his day. The Frenchman is sharp, can play in the channels and also lead the line. Teams pushing for Europe, with plenty of ambition or in need of goals, could do far worse than make enquiries.

Things haven't worked out for Turan at Barcelona since arriving from a successful spell at Atletico Madrid. The Turkey international's start wasn't ideal, coming off the back of a transfer ban for the Catalan outfit, and it feels as though he’s been playing catch-up ever since.

A hard-working, tough but technically gifted midfielder, Turan is a player who can make a system tick but also provide moments of brilliance. If there’s the slightest chance that the version of the player we saw at Atleti could return, then a Premier League club would be landing a real gem.

Another player on the fringes at Atletico Madrid, Vietto is among those most in need of a fresh start right now. Prolific at Villarreal, it was thought that he could be the next major attacking talent from Argentina. Things haven’t quite panned out as expected, however, and Vietto has struggled under Simeone’s demands.

The 24-year-old is a quality player who looks confused and low on confidence. A January move is almost certain, and the right destination for him is the only thing up for debate. At his best, Vietto comes alive in counter-attacking sides, and when given space can take apart defences with his speed and quick changes of direction.

A long shot, but worth an enquiry from a top club regardless: Kovacic is a fine midfielder boasting world-class potential. In Croatia he’s seen as the heir to Luka Modric in terms of leading the national team, but at Real Madrid his countryman is one of the players blocking his path to success.

The 23-year-old’s time at Madrid has been mixed, with a lack of playing time hindering his progress. When he has featured, though, Kovacic has always impressed and looks ready for the top level. The question is whether Real Madrid are ready to hand him more responsibility - or sell him on to fund a big-money move for an attacking player?

Talk of a new deal at Athletic Bilbao persists, but if there’s any time to try to tempt Williams to the Premier League it’s now. Under the current regime, the Spaniard has seen his minutes and influence reduced, and stalled somewhat instead of continuing his development. It's a shame given his progress last season, and the electric young striker could be a real coup for any major side.

The 23-year-old can play from a wide role or as a main striker, and boasts excellent pace and close control. The only issue is becoming more prolific in front of goal, and that’s all that has kept him from a major move. Still, that can be worked on – the main ingredients for a top player are there.

Surprise package Dakonam has been one of La Liga’s under-the-radar players of the season at Getafe. He’s a sharp, assertive centre-back who is capable of shutting out danger and handling the most troublesome of strikers. He’s got plenty of pace, is strong in the air and can also hit hard in the tackle.

Djene could be a steal for a Premier League club needing some defensive reinforcements.