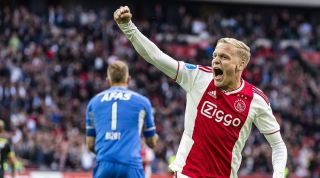 Matthijs de Ligt and Frenkie de Jong have been the most revered members of Ajax’s thrilling young side, but Van de Beek is another prodigious talent – as Tottenham themselves discovered in the first leg of their Champions League semi-final. The midfielder scored for the 15th time of 2018/19 in north London, breaking into the box in typical fashion to slot home what proved to be the winning goal.

Spurs have been unfortunate with midfield injuries this term, but it’s clear that they need to bolster their options in the engine room ahead of next term. The 22-year-old Van de Beek is a strong runner and intelligent mover with sufficiently quick feet to thrive in tight areas – exactly the type of player Tottenham should be going after.

Hugo Lloris is still capable of producing a spectacular performance – he was magnificent in victories over West Ham and Borussia Dortmund earlier this campaign – but he’s been in decline for a couple of seasons now. It would be ruthless to axe a player who’s closing in on 300 club appearances, but Spurs should seriously consider seeking an upgrade in this summer’s transfer market.

Paulo Gazzaniga has impressed in a handful of cameo appearances, but he’s probably not the long-term answer. Strakosha could prove an inspired signing: the Albanian is agile, commanding with possesses sharp reflexes, and at 23 is very much one for the future.

Tottenham are currently well stocked at centre-half, but that would change if Toby Alderweireld departs this summer. The Belgium international has a little over a year left on his contract, and Daniel Levy is unlikely to risk losing him for nothing in summer 2020.

Hermoso would be an astute addition to a central defensive pool which already contains Jan Vertonghen, Juan Foyth and Davinson Sanchez. The left-footed Spain international has enjoyed a fine season with Espanyol, demonstrating excellent anticipation skills and composure in possession as the Catalan club battle for a Europa League place.

Kieran Trippier was arguably England’s standout performer at the 2018 World Cup, but it’s all been downhill from there. The former Burnley defender has struggled at club level this term, meaning he's been dropped for the erractic Serge Aurier on occasions. It wouldn’t be a surprise if Mauricio Pochettino targets a new right-back this summer.

Hysaj is something of a throwback in that his best qualities are defensive rather than attacking, although he certainly has something to contribute in the final third. The 25-year-old is a versatile player who can also fill in at left-back and could be open to a new challenge after four years at the Stadio San Paolo. Fittingly, Napoli are said to be interested in signing Trippier this summer.

Recruiting a centre-forward is difficult for Tottenham, who are certain to field Harry Kane as their line-leader whenever the England captain is fit. Neither Vincent Janssen nor Fernando Llorente are the answer as back-up No.9s, however, and Spurs should ensure they have a better Kane replacement waiting in the wings for 2019/20.

Gomez is a player they should be keeping tabs on. The Uruguayan has been a rare bright spot in a poor season for Celta Vigo, scoring 13 goals in 35 league outings for the Spanish strugglers. Liverpool and West Ham are both said to be interested in the 22-year-old.

Rabiot hasn’t played a single minute of competitive action since December after being banished from PSG's first-team squad for his refusal to sign a new contract. There’s no question that the Frenchman will leave the Parc des Princes next month; the only thing that’s unclear is where exactly he’ll be playing his football next season.

Tottenham would have to lock horns with some big names for Rabiot’s signature – Manchester United, Barcelona and Liverpool have all been linked – but the likelihood of regular football in north London could appeal to a player who has only once made more than 30 league appearances in a season. A terrific passer who sets the tempo from a deep-lying role, Rabiot would provide more quality at the base of Spurs' midfield than either Victor Wanyama or Eric Dier.